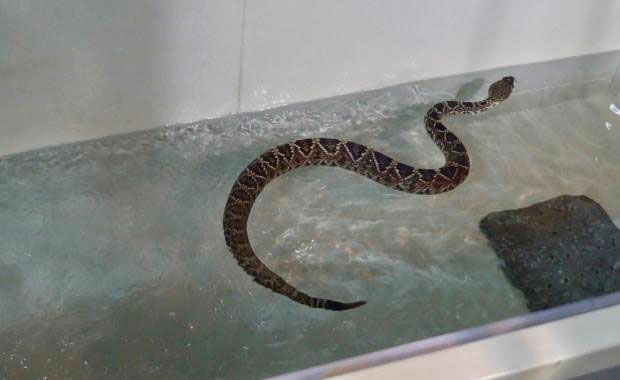 Melbourne Zoo has built a revolutionary, world-first hydro gym for its reptiles - designed to keep the animals fit and healthy.

The concept for the custom-designed exercise pool is the result of more than a decade of extensive planning by the zoo’s Reptiles, Invertebrates & Education Life Sciences team.

Keeper Alex Mitchell said the new facility was keeping the animals fit and active and, in turn, helping prevent illness and disease.

“The hydro gym is a temperature-controlled, filtered body of water, which allows keepers to manage water flow through the tank,” Mitchell said.

“Swimming against the current in the water enables the animals to build up their level of fitness, increase their muscle tone and be active, much like their wild counterparts would.”

Boasting an ultra-violet (UV) steralising unit, inline heating and hydro pumps, it is believed to be the first of its kind in the world.

Since the completion of the facility, a variety of the zoo’s reptiles have been reaping the benefits of their new exercise sessions.

“Eastern Diamond-back Rattlesnakes often swim for a good period of time, whilst small monitor lizards, turtles and a variety of other snake species have also been swimming, which will assist with maintaining excellent levels of fitness in these species,” added Mitchell.

He said keepers had been passionately working on the hydro gym project for several years.

“The concept has evolved over time, from attempting to encourage snakes to swim and exercise in a bucket of water, into the revolutionary facility we have today. It has allowed us to raise the bar in the welfare management of reptiles.”

The hydro gym operates in an off-limits facility within Melbourne Zoo’s Reptile House.