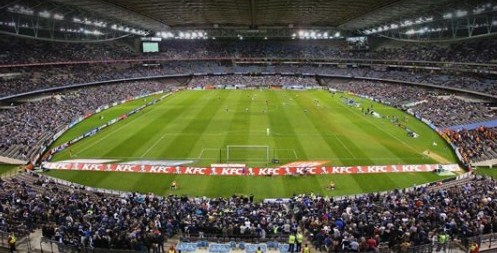 Melbourne Victory's active supporter group followed through on a threat to walk out of the club's A-League match against Adelaide United at Etihad Stadium on Saturday evening.

Around 1,000 fans from the North Terrace left the Stadium after half an hour to protest against what they see as heavy-handed treatment by Football Federation Australia (FFA) of banned fans.

The issue became polarised after a list of 198 fans, banned from attending the A-League for anti-social behaviour, was detailed last Sunday in News Corp Australia newspapers.

Fan groups across the A-League have made their displeasure known with what they see as a lack of support from the governing body and a privacy breach.

Earlier, Victory's fan group unveiled banners reading "198 Bans, 0 Appeals" and later, "It's in your hands" - a clear message to FFA.

As they filed out, they were greeted by warm applause from the Etihad Stadium crowd, demonstrating support for their cause.

On Friday night, Melbourne City supporter group 'Melburnians' chose to vacate their position behind the goal during their match with Perth Glory.

Before kick-off, they showed signs reading "No Fans No Football" and "Terraces Not Terrorists".

The latter is a reference to Sydney radio personality Alan Jones, who compared A-League fans to terrorists involved in the Paris attacks.

City fans also produced a "We Stand By the 198" banner before security ripped it up and confiscated it.