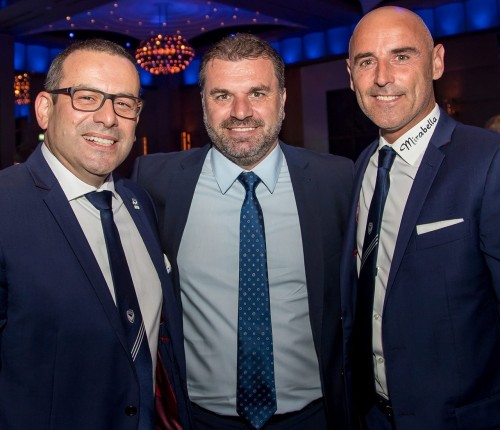 Melbourne Victory Chairman Anthony Di Pietro has delivered a strong message to Football Federation Australia (FFA), stating it is time for the body to deliver funding and decision-making powers back to A-League clubs.

Speaking to an audience of 1,200 people at the Victory In Business luncheon on Friday afternoon, Di Pietro directive was clear - clubs are fed up and they're not going to take it anymore.

FFA Chief Executive David Gallop, Socceroos coach Ange Postecoglou and several A-League club owners and chairmen were among the guests who heard the speech from one of the most respected voices in the sport.

Di Pietro stated "it's time for courage and change to grow our great game.

"The viability of the league since its inception has hinged on the club owners meeting the significant operational funding challenges of this league.

"The challenges are made all the harder knowing that A-League-generated revenues are diverted to other matters and that's outside of our control or say.

"All revenue raised by the A-League should be retained and invested to grow the A-League.

"The marketing investment in this game needs to deepen and it needs to reach out to the broader community and the sporting public. It needs to bring everybody in. We need to make everybody aware and engaged in this sport."

Part of a new broadcast arrangement means a significant amount of income will be received by the Football Federation Australia, with Di Pietro applauded by club owners after calling for more of those dollars to be given to the clubs, most of who run at a loss each year.

Di Pietro added "the pending decision which is now upon us, on distributions back to the A-League clubs, is going to be monumental."

The Victory co-owner also talked about expansion, and while affirming the club was behind the FFA's push for expansion, he expressed concern that the current plan for growth might not serve in the game's best short term interests, concluding "at the core of any expansion, we must be confident that any new licences don't compromise the mainstream integrity and the marketability of the competition.

"They must embrace all of us who enjoy sport. Far too much money has been invested in the A-League and we've got to learn from lessons past; both good and bad."