The major shareholders of the NRL’s Melbourne Storm have announced that they are assessing the viability of adopting a fan ownership model to drive the club’s future financial growth.

Reportedly looking at a fan ownership model based on the NFL's Green Bay Packers in the USA, a statement from the Club advised "the concept will give the public the opportunity to invest in the football club and in turn become not just fans but shareholders in the Melbourne Storm."

The Storm, who lost the NRL grand final against the Sydney Roosters on Sunday have one of the highest membership bases of any NRL club, with about 25,000 people signing up this season.

Storm Chairman Bart Campbell, who is one of three owners of the club alongside Gerry Ryan and Matt Tripp, is excited about exploring the fan-ownership model.

Campbell advised “when the owners took control of the Melbourne Storm five years ago, we committed to explore the viability of the fan-ownership model once we had established a sustainable financial platform for further growth.

"We have been able to achieve that objective with the support of our fans and commercial partners, and now is the time for us to look at the future of our football club.

"We see fan ownership as an innovative way to set the platform to turbo charge the ambitious growth plans we have for the Storm, including doubling our membership to 50,000 by 2023.

"We know this is a complex issue and it will take some time to fully understand the interest and detail of a fan-ownership model. We will keep fans up to date on any decisions that are being considered." 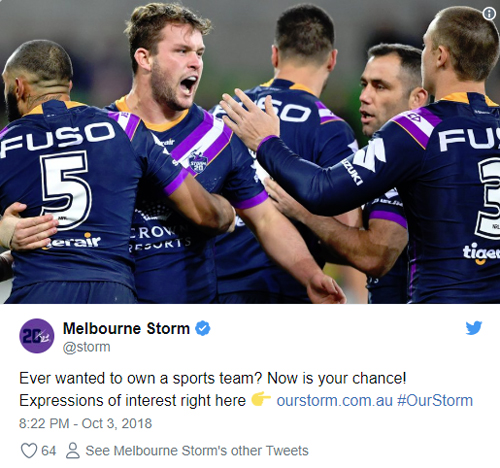 Storm Chief Executive Dave Donaghy said the proposed ownership model offers more than just pride to the supporters, as it may give the club an advantage in the competitive Melbourne sports marketplace.

Donaghy told the ABC “if the interest is there to at some point ideally have fans own Melbourne Storm … we think (it)  will provide the Storm with a real competitive advantage over the opposition.

"It's quite unique for fans. Obviously in AFL, their fans are incredibly passionate about their club but they can't actually become owners.

"In this case, we're Melbourne's rugby league team and if the interest is there, there will hopefully be a way where fans can buy their way into the Storm.

The Packers, based in the Wisconsin city of Green Bay, work under a system in which they are owned by over 361,169 shareholders - representing 5,009,562 shares.

The two-time Super Bowl champions have been a publicly owned non-profit corporation since 1923 and are governed by a shareholder-elected board of directors, who appoint a seven-member executive committee.

The success of the Packers, who have also won numerous conference championships, is remarkable considering Green Bay has a population of just over 105,000.