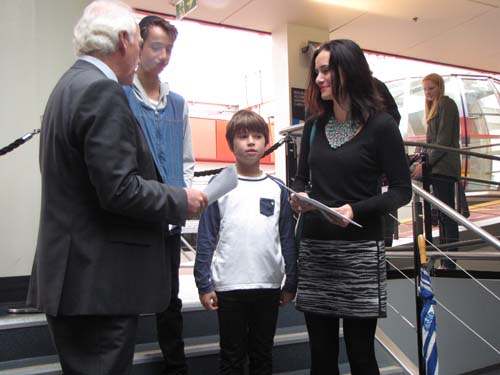 Less than four months after opening, the Melbourne Star Observation Wheel has welcomed its 100,000th guest.

With Alex nominated as the 100,000th arrival by his family, he was presented with a special ‘Docklands Experience’ gift package that includes a night’s accommodation for two at The Sebel Docklands, a two hour City Tour for two people with local operator ‘Tours On Trike’ and a Melbourne Star Family Encore Package for two adults and two children.

Commenting on reaching what he described as an “important milestone" so soon after opening, Kelly explained "the Melbourne Star is successfully establishing itself as a key destination for visitors to Melbourne as well as locals and we're very encouraged by the feedback and level of interest we're receiving.

“10% of our guests have already returned for a second visit, showcasing that there is a very distinct difference between the day and night experience; we look to welcoming Alex and his family back to the Melbourne Star in the near future."

The 120-metre high Melbourne Star has 21 fully enclosed air-conditioned glass cabins, each capable of accommodating up to 20 guests. It offers views of up 40 kilometres, including the Docklands precinct, Melbourne’s CBD, Port Phillip Bay and as far as Mount Macedon and the Dandenong Ranges.

Visitors also enjoy a wealth of information about Melbourne, including its history, culture, and attractions through a pre boarding display and story panels, ‘Tales of Melbourne’, and via specially researched cabin audio.

The Melbourne Star is the first, most complex, solid steel wheel design to be built in the world to this size.