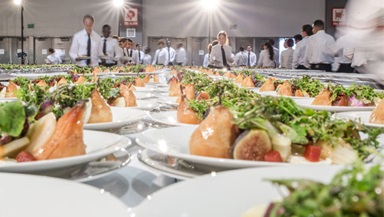 Melbourne and Olympics Parks and Tennis Australia have announced that global service and hospitality company Delaware North has been appointed as the official caterer for the Australian Open, Rod Laver Arena, Hisense Arena and the Melbourne Park Function Centre.

"The changing needs of our precinct, our patrons and our tenants were thoroughly examined and the choice of the appropriate caterer was based on who could deliver the best service, in the most cost-effective way.

"Delaware North was chosen from a strong field of applicants, and as the incumbent, we look forward to the ongoing provision of high-quality food and beverage at the Australian Open, events, functions and concerts."

Wood explained "this was the first time Tennis Australia has had the opportunity to be part of the catering tendering process for the Australian Open in partnership with Melbourne and Olympic Parks Trust.

"We understand how important food is to the overall patron experience at any event. Delaware North was able to successfully demonstrate its capacity to continue to invest and innovate, and help maintain the Australian Open as Australia's premier global event."

The new contract commences on 1st May 2013 and is part of tri-partite agreement between Melbourne and Olympic Parks, Tennis Australia and Delaware North.

Delaware North Managing Gary Brown added that the company's success with Melbourne and Olympic Parks and the Australian Open was due to the 24 years of passion, loyalty and commitment to the venue, the client and the 34 million guests that have passed through the gates throughout its tenure.

Brown explained "we are proud to continue our operations in the largest multi-purpose sports and entertainment venue in Australia."