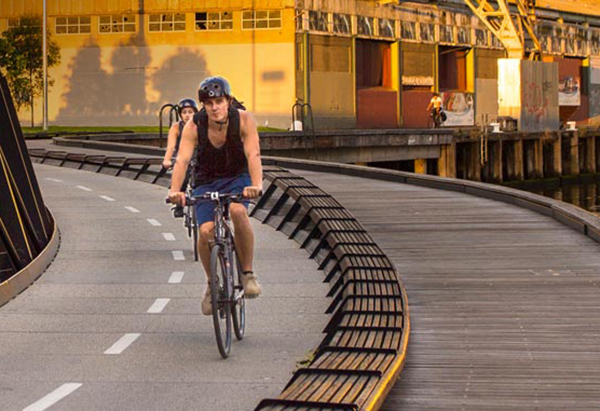 Commenting on the funding announcement IMAP state that “the pandemic has in fact presented us with a golden opportunity to re-imagine transport across greater Melbourne, review our bike riding commitments in the inner suburbs and make changes to encourage bike riding, bringing with it widely recognised health, economic and environmental benefits.”

IMAP has been advocating for an integrated cycling network for several years and recently developed a proposal for a staged bike riding network, based on innovative modelling.

The project will also have an economic benefit in creating short-term jobs, and improving connectivity to the Melbourne CBD as people resume their work commute.

Importantly, delivery of the project components can be integrated into any short- and longer-term infrastructure changes to streetscapes that are being undertaken as part of the response to the pandemic.

Health promotion foundation, VicHealth also welcomed the Victorian Government’s plans to make bike riding easier for Melburnians in new COVID-normal through delivering 100 kilometres of new and improved cycling routes in and around Melbourne to make it easier for locals to travel to work, school, the shops and other commitments when Coronavirus restrictions ease.

VicHealth Executive Manager Programs Kirstan Corben said the changes are a win for the mental and physical health of Victorians noting “it’s fantastic to see the Victorian Government commit to installing more bike lanes and mandatory minimum passing distances to support the health of our community at this challenging time.

“Bike riding is so good for our physical and mental wellbeing, and during lockdown we’ve seen a surge in the number of Victorians jumping on their bikes and reaping the health benefits.

“Having more bike lanes, combined with new mandatory minimum passing distances will help people feel more comfortable riding their bikes around Melbourne. The additional bike lanes will also make it easier for people to maintain at least 1.5m from other people."

A recent survey from VicHealth 1,000 Victorians revealed 3 in 4 Victorians want local and state governments to adapt infrastructure so more people can walk or ride.

Many Victorian councils like the City of Moreland, City of Yarra, City of Melbourne and City of Greater Bendigo have been making upgrades so residents and commuters can easily walk, ride or scoot around their communities for enjoyment and travel in lockdown and when restrictions ease.