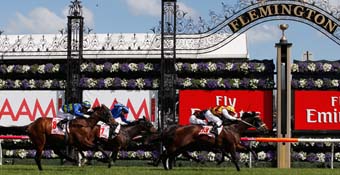 Today's Melbourne Cup is once again expected to draw massive crowds to the Flemington Racecourse while also representing the annual peak in Australians gambling on horse racing.

However, while in excess of 100,000 are expected to attend the highpoint of the Victorian Racing Club's Spring Racing Carnival, new research from Roy Morgan shows that, like many other forms of gambling, betting on horse races is slowly losing popularity among Australian adults. In the year to September 2004, 8.3% of Aussies 18+ bet on horse-racing at least once in any given four-week period. By September 2014, this had dropped to 5.3%.

However, Roy Morgan's research shows that come Melbourne Cup and Spring Racing Carnival time, the percentage of the population having a flutter inevitably jumps up.

In November and December last year, 10% and 10.8% respectively of Australian adults reported betting on horse-racing in the previous four weeks - a major rise from the 4% who reported doing so in October 2013 and the 5.4% in January 2014.

As the chart below shows, this trend is fairly consistent over the last four years, although the December figure has seen some decline. 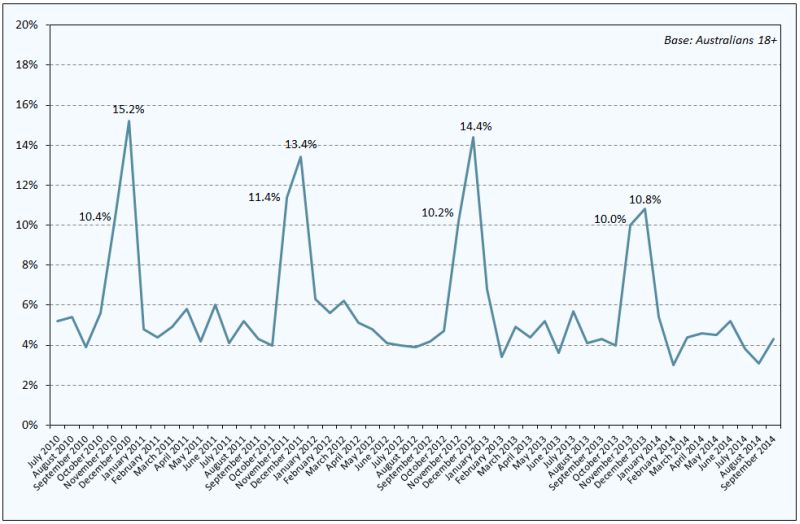 Despite the increased punting activity around Melbourne Cup time, the proportion of Australians aged 18 and over who watch the race on TV has gone down in recent years. Whereas 10 years ago 39% of Aussie adults said they tuned in for the event, this figure has since dropped to 31.1% at the year ended September 2014, making it less popular than the AFL Grand Final (33.7%) but more popular than the NRL Grand Final (25.6%).

Commenting on the findings, Roy Morgan Research Group Account Director Angela Smith explains "although betting on horse racing has been in decline across Australia for at least a decade, the Melbourne Cup - and the spring racing season generally-  always causes a punting flurry, with significantly increased betting incidence around November and December.

“So much of the PR for the Melbourne Cup and the Spring Racing Carnival is clearly targeted at young people with its focus on fashion, fun and frivolity.

"Yet when we use Roy Morgan Research’s in-depth consumer profiling tool Helix Personas to analyse who is most likely to bet on horse racing and who’s most likely to be watching the event on TV, the results paint a different picture.

“Among the personas most likely to bet on horse racing are Rural Rewards, typically older, country-based couples with conservative attitudes; and Frugal Living, elderly people on low household incomes for whom having a flutter at the TAB is one of life’s little pleasures.

“Rural Rewards are also the persona most likely to watch the Melbourne Cup on TV. Smart Money — typically well-off, middle-aged and very sociable — are also more likely than most to tune in to the big race. Chances are they’ll catch it at a Cup Day lunch or barbecue somewhere, surrounded by a bunch of like-minded friends.

“Younger personas such as Big Future and Making the Rent are in fact less likely than the average Aussie to watch the Cup on TV or bet on horse racing."