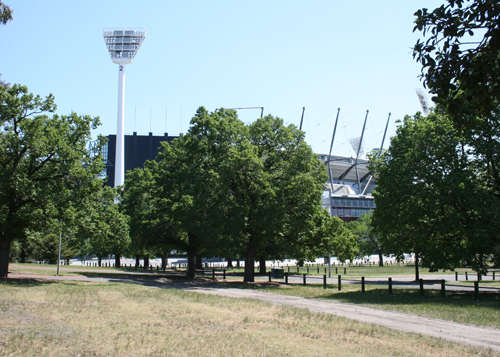 On the eve of the Melbourne Cup, Melbourne has again been recognised as Australia's liveable city and most popular interstate tourist destination with new research by Roy Morgan showing Melbourne continues to outperform Sydney, Brisbane and Adelaide.

The research shows that Australians now consider Melbourne to be the best city for:

Releasing the research Victoria Premier John Brumby and Tourism and Major Events Minister Tim Holding, said Melbourne had come a long way over the past 10 years, with Premier Brumby stating "this shows yet again why Melbourne is the liveability capital of Australia.

"Victorians are rightly proud of our lifestyle and the things that make our State stand above the rest â and this research shows that the rest of Australia agrees.

"10 years ago Sydney was Australiaâs leading city but things are very different today â Melbourne now leads Sydney on all major indicators in the survey."

After the 2000 Sydney Olympics, Melbourne was well behind Sydney as the leading city for hosting major sporting and cultural events. Now 54% of people think Melbourne is the leading events city compared to only 35% for Sydney.

In 2000, Melbourne trailed Sydney as the leading city for cafes, bars and nightclubs. Today, 52% of people say Melbourneâs cafe culture and diverse nightlife is the best compared to only 25% for Sydney.

The research is supported by the latest domestic visitor numbers which show Melbourne is the most popular city in Australia for interstate visitors.

For the year ending June 2010, Melbourne had 708,000 more interstate overnight visitors than Sydney. This is in stark contrast to 2000 when Sydney had 319,000 more visitors - an astonishing one million visitor turnaround.

Minister Holding said Victoria's liveability was no accident and was the product of hard work across the community, stating "it is Victorians who have made Victoria such a great place to live and visit - and our Government is determined to preserve and enhance Victorians way of life."

Minister Holding said the outlook for Victoria's tourism operators is extremely positive, adding "tourism is worth close to $16 billion to Victoria's economy and employs 185,000 people and we will continue working to get more and more people to visit Melbourne and regional Victoria.

"On top of our year-round calendar of major events we have a number of one-off events over the next year including Tiger Woods and Geoff Ogilvy at the Australian Masters in November, the Presidents Cup and the Australian premiere season of Love Never Dies.

"The big investments in Australian hotels over the past few years have taken place in Melbourne including Crown Metropol which is Australia's largest hotel, Hilton South Wharf, the Grand Hyatt redevelopment and the refurbishment of the Intercontinental Melbourne The Rialto.

The Roy Morgan research was commissioned by Tourism Victoria and is carried out each year in June, with 1200-1400 people interviewed from across Australia.

The 2010 Brand Health Survey summary report can be found at www.tourism.vic.gov.au