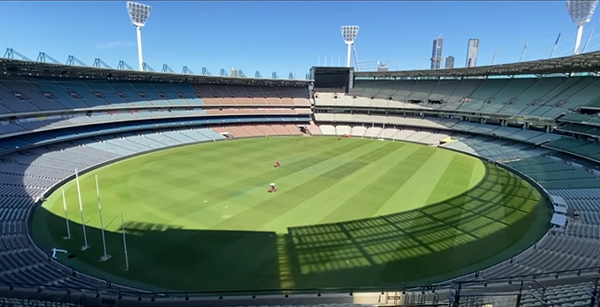 When the 2020 AFL Premiership Season resumes with on 11th June, the Melbourne Cricket Ground (MCG) advises it will be on a near-perfect turf.

HG Sports Turf have been charged with the responsibility of MCG turf maintenance since 1998.

The recently released revised AFL fixture for rounds 2-5 will see Collingwood host Richmond at the MCG to re-launch the 2020 Premiership Season, after play was suspended due to the COVID-19 pandemic.

While the nine-week hiatus has been trying for many football fans, MCC Executive Manager of Turf Michael Salvatore says it has provided an unprecedented opportunity for the MCG turf to grow and recover.

Salvatore notes “I’ve never seen the coverage, or the health, of the ground this good. From a purely turf side of things, it’s been fantastic. It doesn’t have any wear and tear.”

Salvatore and his team of seven had prepared the turf for round 1 of the AFL Season on just a nine day turnaround from the Women’s T20 World Cup Final on 8th March. Since play was suspended on 22nd March, the turf has undergone a growing period rarely permitted by a full MCG calendar.