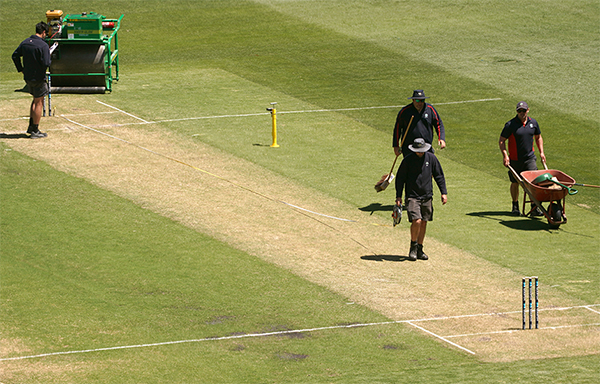 The Melbourne Cricket Club has today apologised for the state of the pitch at the MCG, which forced a Sheffield Shield match to be abandoned after attempts to make it playable for day two failed.

Less than three weeks out from the Boxing Day Test between Australia and New Zealand, play was been abandoned yesterday on the first day one of the clash between Victoria and Western Australia because of dangerous pitch conditions.

Match officials called a halt to the match 45 minutes into the second session on day one of the fixture, before later abandoning play for the day.

Despite ground staff working on the pitch, match officials determined this morning that the pitch was still too dangerous.

Too much moisture in the drop-in wicket led to divots, which hardened under the sun, creating uneven bounce and danger for the batsmen.

Curator Matt Page and his ground staff attempted to even out the deck and make it playable after the embarrassing situation unfolded.

Defending the approach taken by Page ahead of the match, Fox stated “I think we all know this is not ideal, but our curators and staff have our full support.

"They haven't done this on their own, it's been at the direction of the Melbourne Cricket Club and that has been supported by all of our stakeholders.

"We've all wanted more life in these pitches - we didn't want this much, it is unfortunate and we apologise for that.

"But we're not going to crucify people, it's all about learning.

"We're spending a lot of money to improve our pitches over the long term, and it was never, ever going to be a short-term game."

Cricket Australia said it would work alongside MCG ground staff to make sure "the best possible wicket" was prepared for the Boxing Day Test.

The MCG’s wickets have been criticised as being too docile in recent years and received unfavourable ICC ratings.