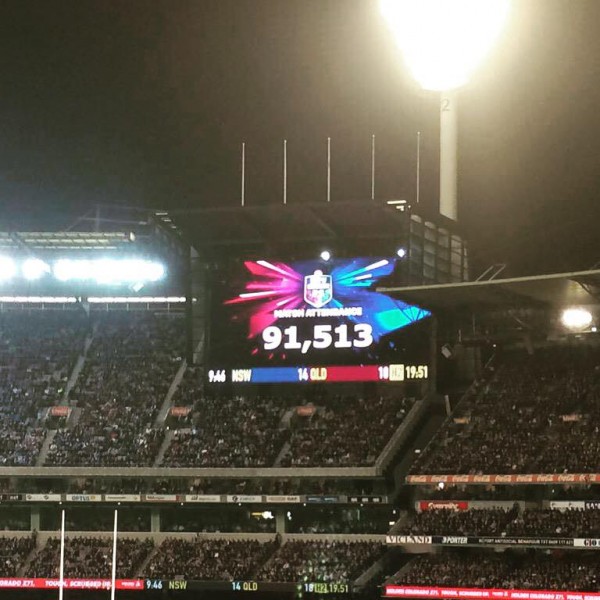 The Melbourne Cricket Ground (MCG) last night set a new State of Origin attendance record with a crowd of 91,513 watching NSW defeat Queensland in the second march of the three game series.

The NRL’s decision to bring their showpiece back to Melbourne for the first time since 1997 was rewarded, with the crowd being one of the largest of the year for the 100,000 capacity MCG - the ICC Cricket World Cup Final earlier this year having recorded a crowd of over 93,000.

The MCG attendance bettered the previous Origin record of 88,836 for game two of the 1999 series at ANZ Stadium, the year ­before it was the centrepiece of the Sydney Olympics.

With its current 83,500 capacity, ANZ Stadium attracted a crowd of 80,122 for the first game in the series on 27th May, leading Victorian Premier Daniel Andrews to tease NSW Premier Mike Baird prior to last night’s game.

Premier Andrews stated "the Premier of New South Wales still has to travel to Victoria if he wants to know what a sell-out State of Origin crowd looks like."

The record State of Origin attendance came on the day that Premier Andrews announced plans to battle other Australian states for every major sporting and cultural event "worth taking" as part of an aggressive events-based economic strategy.

Premier Andrews told 3AW “we’re going to be coming after it, in earnest.

“Last night showed every fan of every sport really, that we can fill stadiums here in Melbourne.”

Fittingly, prior to the match a moment's silence was observed for legendary runner and industry figure Ron Clarke who died yesterday after a short illness. Clarke, who lit the cauldron at the 1956 Olympics held at the MCG, and again carried the Olympic torch at the MCG during the Sydney 2000 Olympic torch relay.

The 2015 State of Origin decider will be held at Brisbane’s Suncorp Stadium on 8th July.