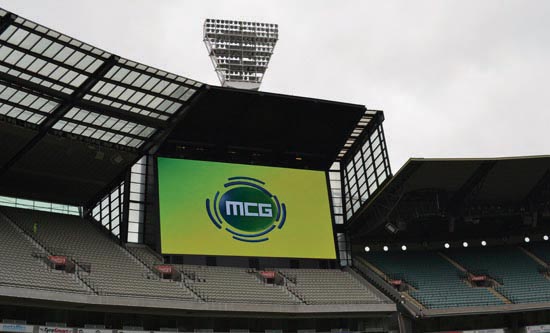 The two new scoreboards at the Melbourne Cricket Ground (MCG) have been recognised globally – being shortlisted in the Project of the Year category at the 2014 Stadium Business Awards.

The state-of-the-art Daktronics LED vision boards are, at 332 metres2, the largest to feature at an Australian sports stadium to date and have a digital screen area three times the size of the MCG’s previous scoreboards.

Since being unveiled on prior to the Boxing Day Test in December, the $5 million screen have been praised widely for their quality.

Located on Level 4 in the Ponsford and Olympic stands, the screens provide live high-definition vision during MCG events with the aim of taking the fan experience at the MCG to a whole new level.

Other stadiums shortlisted in the Project of the Year category include Emirates Old Trafford (home of Lancashire County Cricket), Manchester; Liverpool FC’s Anfield and Nottingham Forest’s City Ground, all based in the UK. China’s National Games installation in Dalian and Sweden’s Tele2 Arena also feature.

Work commenced to prepare the stadium for the new boards immediately after the 2013 AFL Grand Final, following more than two years gathering information and visiting some of the world’s best and newest stadia.

Melbourne Cricket Club Chief Executive Stephen Gough explains “the Stadium Business Awards are regarded as the pre-eminent awards for the stadium industry around the globe.

“We’re thrilled that our project has been recognised as best practice by the industry.

“We see this is as perfect example of investing in the best. More than three million people visit the stadium each year. We now have the largest screens in Australia. We have a clarity that is unparalleled and I think the quality, after an exhaustive tender to get the best products into the best stadium, is what we’re all about.”

Sutherland stated “the MCC’s initiative of installing the new screens sets the standard for Australian stadia and will offer fans attending next summer’s ICC World Cup games, including the final which we expect to attract a huge crowd, a world-class experience befitting that tournament.”

The 2014 Stadium Business Award winners will be announced in London on 4th June.

The screens were supplied and installed by Daktronics Australia who have built vision boards at Metricon Stadium, Skoda Stadium, Simmonds Stadium, the SCG and the revamped Adelaide Oval.