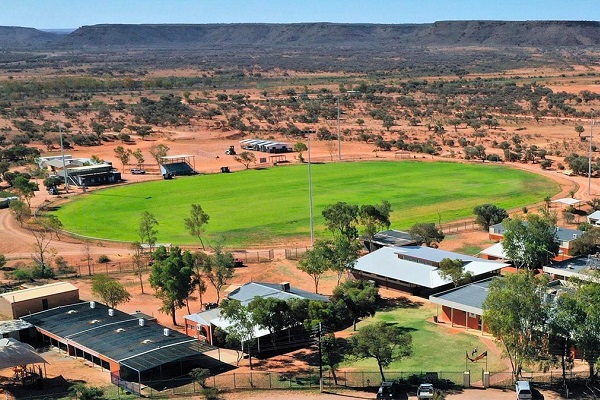 A partnership between the Melbourne Cricket Club (MCC) Foundation, Melbourne Football Club and the Atyenhenge Atherre Aboriginal Corporation (AAAC), has seen the main sportsfield in the remote Northern Territory community of Santa Teresa transformed into what has been called the ‘MCG of the desert’.

Commenced four years ago, the project, first proposed by the AAAC, has seen the transformation of the previously red dirt ground into a lush grass oval.

Hosting its first competitive match earlier this month, the Santa Teresa Oval features goalposts delivered from the MCG and brand-new lights, funded by the Central Land Council. The MCC Foundation has also donated one of the MCG’s grass mowers to assist with ongoing maintenance.

The MCC Foundation joined the project as a major partner in August 2019 with a four-year financial commitment to ensure the venue’s feasibility and sustainability long into the future.

While the oval was originally set to be launched in 2020, the impact of the COVID-19 pandemic saw delays with the sowing of the grass and subsequently, the opening pushed back until this year.

With the previous red dirt field made up entirely of clay, issues such as injury on the hard, unstable surface, breathing difficulties and increased eye disease rates from the red dust were the major drawbacks preventing sports participation among children and adults in the community.

The state of the oval had also made programs such as AFL Auskick or athletics near impossible to implement with any consistency as dust-settling rain is only expected for one to three weeks of a year in the region.

Through the MCC’s role as manager of the MCG, Executive Manager of Turf Michael Salvatore visited the Santa Teresa community in 2019 to provide consultancy on the oval’s turf maintenance and growth.

MCC Foundation Chair, Sally Macindoe said she was delighted that the community was able to enjoy first use of ‘the MCG of the desert’, advising “it is wonderful to see the Oval come to life. The Santa Teresa community have been patient and waiting for this day for a long time, and while it is a shame not to be there for it on the day of its launch, we cannot wait to see photos and video of the locals enjoying and playing on their own hallowed turf.

“Making sport, and the opportunity to participate in sport, available to everyone and breaking down the barriers that prevent anyone participating in sport, is a key principle of the MCC Foundation and also our MCC members.

Melbourne Football Club Chief Executive, Gary Pert said the community of Santa Teresa and the oval project has incredibly close to the heart of the football club.

Pert added “since the concept of grassing the oval was first proposed to us, the club has worked incredibly hard to help make this dream a reality for the people of Santa Teresa.

“(The) launch was an amazing celebration for the community and a fitting acknowledgement of many years of hard work and determination that has seen this project brought to life."

Atyenhenge Atherre Aboriginal Corporation (AAAC) & Santa Teresa Enterprises Limited Chief Executive, Ellie Kamara said the impact of the oval on the community is phenomenal, going on to say “the idea to grass the oval in Santa Teresa was born from a random, wishful remark and the Melbourne Football Club has turned our crazy idea into a reality.

“The support of Melbourne, both in a financial and practical sense has been invaluable and they are an amazing friend of our little community.

“We look forward to the new horizons that the oval will bring to our community and are so thrilled that our children and sports men and women will have a facility to rival any small town in Australia.”

Originally set to coincide with the Round 12 AFL match between Melbourne and Brisbane Lions at Alice Springs’ Traeger Park, which was relocated to Sydney due to Victoria’s Covid outbreak, the upgraded oval’s first-ever match was an in-house game between communities of the Ltyentyies football team.

The MCC Foundation will continue to provide funding and support to the Santa Teresa Oval until at least 2023.