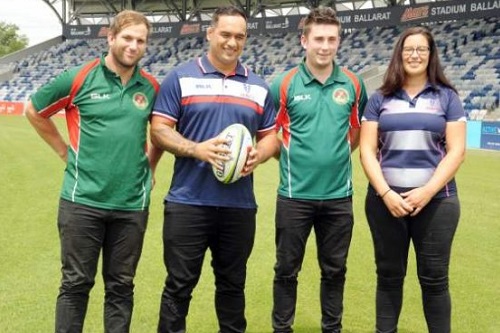 With Super Rugby coming to Ballarat’s Mars Stadium on Friday 1st February, this week has seen preparations for the fixture underway with the installation of rugby union posts at the venue.

The fixture, which will be the first ever rugby union game at the venue, will see the Melbourne Rebels take on the Queensland Reds in a practice match for the Super Rugby season..

Part of a  three-year partnership between the City of Ballarat and the Melbourne Rebels, Ballarat Mayor Samantha McIntosh sees the game as a fantastic opportunity for Ballarat and Western Victorian rugby fans to see top level rugby in their own backyard.

Mayor McIntosh explained “the Rebels have had a longstanding connection to Ballarat and particularly the Eureka rebellion - it’s going to be great to take that connection with Ballarat to the next level with this practice match.”

Adding that the partnership aims to encourage a broader array of the community to get involved in sport, Mayor McIntosh stated “our goal is to really involve the local rugby community and even more broadly than that, we’ve been working really strongly on our women’s and girl’s .

“This is a blokes’ match - it will be great for everyone - but we really want to get all those women and girls involved as well.”

A couple of thousand people are expected to attend the practice match at Mars Stadium which Mayor McIntosh said is “flexible.”

Preparations for the fixture have seen Abel Sports installers were onsite at the venue installing the footings for the goals.