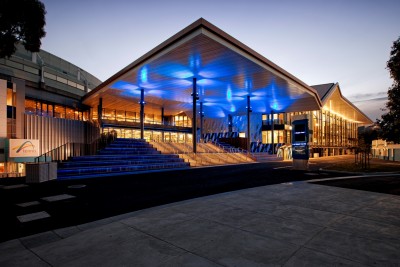 Put to the test during the first five days of the Australian Open, the newly revamped Margaret Court Arena at Melbourne and Olympic Park has helped boost spectator numbers.

Designed by NH Architecture + Populous, the $183 million redevelopment of the Margaret Court Arena has delivered a state-of-the-art retractable roof - the fastest closing in Australia. The refurbishment also provides the Australian Open and the Melbourne and Olympic Park Trust with a third all-weather venue – more than any other Grand Slam precinct.

For the sports architects Populous this is their second Grand Slam venue; having also designed the new roof over Wimbledon Centre Court in London, completed in 2009.

“I don’t know of any arena in the world that can beat this and it is going to be a huge benefit, because now the weather will not disrupt play.

"You can start bringing the roof in a little closer while playing continues and then during the changeover completely close the roof.”

As with all retractable roofs, the redevelopment enables Margaret Court Arena to evolve from a single-use tennis venue to a true multifunctional facility. The primary use of the arena will continue as host to major matches of the Grand Slam tournament, but it will also host netball, basketball, concerts and entertainment events, enabling Margaret Court to be a functional all-weather boutique venue for a busy all year round schedule.

The 2015 Australian Open has been attracting strong attendances during its first five of competition with 74,748 attending on day five (Friday 23rd January) and a record night five attendance of 28,290.