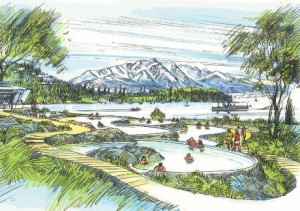 Ngāi Tahu Tourism (NTT) has confirmed that it is in discussion with the Queenstown Lakes District Council (QLDC) with regards to leasing Council land to develop a major hot pools and spa complex in Queenstown.

NTT, a subsidiary of Ngāi Tahu Holdings Corporation, is in the early stages of discussion about developing approximately 0.75 hectares of land at the Queenstown Lakeview Campground site for the $25 million development.

QLDC is recommending that the hot pools complex adjoin a proposed convention centre on the Thompson Street frontage overlooking The Remarkables mountain range and Queenstown Bay.

At peak capacity, NTT estimates the hot pools could cater for approximately 300,000 to 350,000 customers a year.

Ngāi Tahu Tourism Southern Regional General Manager David Kennedy said ongoing negotiations would centre around working in with the convention centre site and form part of a detailed council process to determine the best and most feasible uses for the site and for the community beyond 2015.

Kennedy said NTT had carried out extensive customer research over several years into various site options for a hot pools development in Queenstown, which identified the Lakeview site as the preferred option.

Kennedy said the company was excited about ongoing concept discussions with the QLDC and anticipated the hot pools would be very much welcomed by locals and visitors.

He explained "if it went ahead on this site, visitors and locals would be able to sit and relax in the pools taking in the most outstanding and uninterrupted view across Lake Wakatipu to The Remarkables mountain range.

"Ngāi Tahu Tourism has proven expertise to realise a high quality development such as the proposed Queenstown Hot Pools, as seen with our multi-million-dollar Glacier Hot Pools at Franz Josef, which opened in 2008 and is a very similar operation albeit on a smaller scale.

"Our research with visitors to Queenstown has identified that a similar pools product in New Zealand's premier resort would be a very welcome addition to the many attractions already on offer.

"After a day out in the 'Adventure Capital of the World', soaking in a hot pool and taking in the amazing lake and alpine views will be an unforgettable experience for domestic and international visitors."

Kennedy said it was too early to discuss details of the hot pools development at this relatively early stage of discussions, although concept drawings gave an overview.

He concluded "while the council's planning document to be discussed on Thursday recognises that a hot pools development would potentially be a complementary anchor tenant alongside the proposed convention centre, NTT still has to discuss land lease arrangements with the QLDC in addition to carrying out design and full feasibility studies.

"For that reason it is too soon to discuss timeframes and details."