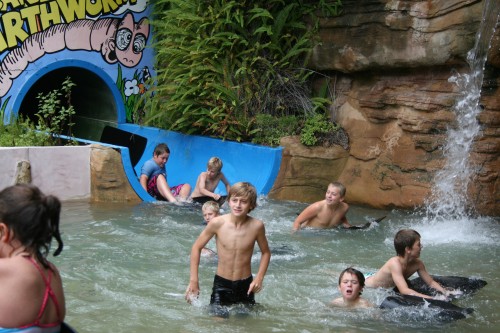 Waterslide attraction the Manly Waterworks, closed since late 2015, may reopen under a new lease agreement between Manly Council and incoming operators of the Manly Bathers Pavilion.

The popular aquatic attraction closed last year when its former operator was evicted over non-payment of rent.

Since then the site on Sydney’s northern beaches, where Nicole Kidman shot scenes in her 1983 film BMX Bandits, has become forlorn and overgrown.

However, the new leaseholders of the Manly Bathers Pavilion, the Severino family who run Miramare Gardens function venue in Terrey Hills, plan to not only reopen the landmark Manly Pavilion restaurant but also to reopen the Manly Waterworks.

Manly Pavilion restaurant manager Paul Severino, told local newspaper The Manly Daily “we’ve been speaking to a few companies that are certainly interested in really bringing this back up (and) fingers crossed, we might be able to get it up and going by summer this year.

Severino confirmed engineers have been in to assess the safety of the slides, and said while most of the fibreglass on the three remaing wateslides remains intact, there are issues with some of the structures and water pumps.

He said he also wanted to get the cafe, which borders the site, to open into the Waterworks too.

Located on Manly’s harbourside adjacent to the Manly SEA LIFE Sanctuary, the attraction first opened in 1981 with four waterslides and last welcomed families in August 2015.

The eviction of the Manly Waterworks’ former operators also resulted in the Surf Educators International - then a sublessee of the Manly Bathers Pavilion - being forced to relocate.