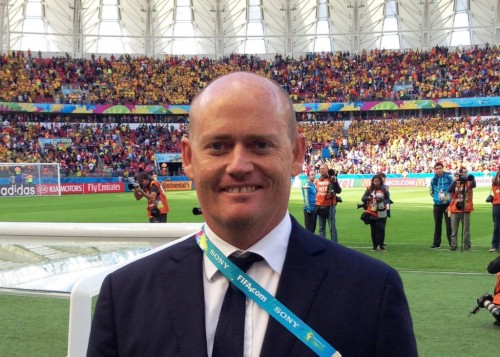 Mason will be bringing a wealth of administrative experience to MWFA and Manly United gained during a 20-year career in the sports industry where he has fulfilled senior roles in football, events, communication and media.

Mason is well known in the ‘football family’, having worked for the FFA and Sydney FC in the Hyundai A-League as well as having an extensive local knowledge of football on Sydney’s Northern Beaches, where he has been a participant in grassroots and elite football for 40 years.

Announcing the appointment, MWFA President Jeff Smit said the MWFA Executive Committee was thrilled Mason had agreed to join the organisation and help drive a unified phase of significant growth across all levels of the game on the Northern Beaches.

Smit stated “we are pleased to announce that David will join MWFA and MUFC as the Chief Executive Officer.

“We are entering an exciting yet challenging period of growth for football on the Northern Beaches and believe David’s football administration experience and local knowledge are a perfect fit to lead football in our area.

“The MWFA and MUFC have been undertaking extensive consultation with all of our stakeholders for the development of a Whole of Football strategy for the Northern Beaches to unify and align all football entities and to develop and implement a Strategic Plan and drive growth for all football.

Manly United Football Club President Louis Dimitropoulos added “David’s appointment is a significant step forward for Manly United and the MWFA as we look to take this club and football in this area to the next level. David has a tremendous mixture of administrative skills and experience, football knowledge and passion for the local game.”

Commenting on his appointment, Mason stated “it is an honour to join the Manly Warringah Football Association and Manly United as CEO.

“I’d like to thank the MWFA Executive Committee and MUFC Board for the opportunity to lead football in this area through what is an exciting period.

“Football is the number one participation sport in Australia and Manly Warringah is one of the biggest and strongest Football Associations in the country so our challenge is to unite the entire football community to take advantage of the momentum football is enjoying.

“I look forward to working with the MWFA Executive, MUFC Board, staff, volunteers and local clubs to serve the 18,000 registered players by building on the structure and support in place to develop and improve the football experience every participant in the Northern Beaches football, from a first time player in the U6’s to those fortunate enough to be selected in one of our elite Manly United squads.”

At the FFA, Mason spent four years working with the Socceroos fulfilling roles at the 2014 FIFA World Cup and the 2015 AFC Asian Cup, as well as the Hyundai A-League and the Westfield W-League.

Prior to the FFA he spent nine years at Sydney FC, fulfilling General Manager roles in Football, Events, Media and Communications, which included the 2006 and 2010 Championship seasons as well as the 2011 Asian Champions League campaign.

Prior to that he worked with Northern Spirit in the former National Soccer League and the Australian Swimming Team and worked as a Media Liaison Officer for the Australian Olympic Committee at the 2004, 2008 and 2012 Olympic Games.

Mason (pictured above) will take up his new role at MWFA and MUFC in mid-July.