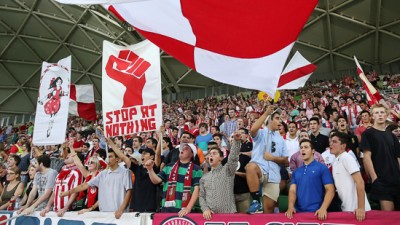 English Premier League football club Manchester City, in partnership with a group of owners of NRL side the Melbourne Storm, have acquired A-League franchise the Melbourne Heart.

Announcing the appointment, Manchester City Chief Executive Ferran Soriano says the Premier League club is excited by the opportunity to invest in the A-League.

In a statement Soriano explained "we are excited about the opportunity to make Melbourne Heart one of the most successful football clubs in Australia and throughout the region.

"We believe the strong sports culture of Melbourne combined with the football and commercial expertise within our consortium will make for a powerful combination both on and off the pitch.

"The first thing we must do is take the time to listen and learn and then to develop our strategy for strengthening the club over time."

The new ownership group says it will not be making any major announcements until mid-2014 out of respect for the coaching staff and players in the middle of the A-League season.

Gallop added "football has moved into the mainstream of Australian sport and is ideally placed to benefit from the boom in football across Asia.

"Manchester City and their Australian partners have made a strategic investment and I welcome them to our growing competition. It's another sign that the world is taking notice of Australian football.

"Manchester City and their partners will bring a high level of expertise in football and sports business matters and that can only strengthen the Melbourne Heart and the ... A-League as a whole."

Storm owner and Chairman Bart Campbell says the NRL club is relishing the chance to strengthen its relationship with a fellow Melbourne sporting franchise.

Campbell concluded "we are excited to be a part of this unique project.

"It is our shared ambition to replicate the model that City created with the New York Yankees around New York City FC and for both organisations to benefit as a result."

City's investment in the Heart follows its establishment of New York City Football Club in May 2013, which will enter Major League Soccer in the United States in the 2015 season.