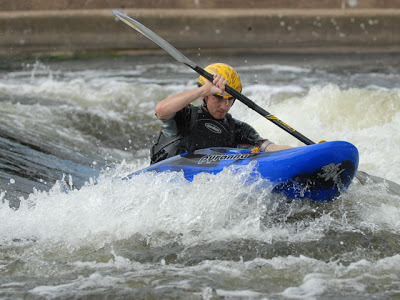 Construction on the Wero Whitewater Park at Manakau has reached the halfway stage with builders expecting the construction to be completed by April next year.

The $37.5 million complex is being built on land at Manukau's Vodafone Events Centre land will be used in the 2017 World Masters Games.

The project is being built in five stages with the whitewater rafting facility as stage one.

Project Manager Matt Lory says the weather has been a hurdle but the construction is on track.

Lory told the Papakura Courier "it's a big project, at the moment we have about 40 construction staff on site.

"There's some really exciting things here. We're building a 4.5 metre controllable waterfall which is the biggest in the world."

Stages 2 and 3 of the project will include changing rooms, storage space, retail space, an exhibition about the human body, an art gallery, a cafe and classroom spaces.

Stage 4 will be an interactive visual display telling the story of the Maori journey from the Pacific Islands to New Zealand and stage 5 will be an artist in residence and gallery project.

Lory says the project team is using as much natural material as possible.

He added "in the main pond, instead of putting down a liner, we're using the clay that's already there."

New Zealand Internal Affairs Minister Peter Dunne gave his seal of approval to the project when he visited the site on 20th August.

Dunne stated "I think this is going to be a great thing for South Auckland, especially as it's so close to the airport."

For more information go to www.wero.org.nz