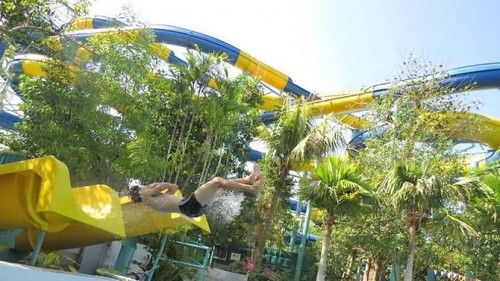 A 1 kilometre-long waterslide is being planned for the Escape theme and adventure park on the Malaysian island of Penang.

The park's new attraction, which will be the world's longest water slide once it is completed, will see riders chairlifted to a height of 420 metres to the top of the hill to get to the starting point of the slide.

Introducing the ride, Escape founder Sim Choo Kheng stated "from the hilltop, people will zoom down the slide which will cross Jalan Teluk Bahang beside a pedestrian link bridge and end in a swimming pool inside our water theme park.”

The plans were revealed last week at the official opening of ESCAPE Waterplay - the second phase of the theme park's launch after Adventureplay which was opened in 2012.

Sim added that the water slide and other hilltop attractions, collectively known as Gravityplay, are planned to be opened by December next year.

Image: One of the new waterslides at Penang's ESCAPE Waterplay.