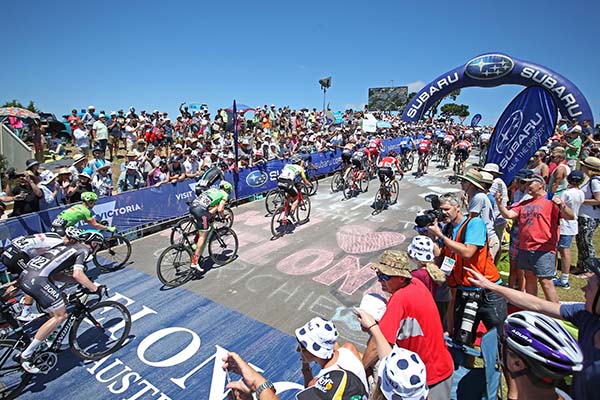 The Cadel Evans Great Ocean Road Race was one of the major events supported by the Geelong Major Events Committee that contributed an estimated $99.3 million into the local economy during the 2018/19 financial year.

The record figure came courtesy of a combined 850,000 participant and spectator attendances across the 25 events and represents a return on the council’s sponsorship investment of 53 to 1. The biennial Australian International Airshow at Avalon Airport made the largest impact on the overall result, generating an estimated $28.9 million in economic benefit on its own. Next came the Cadel Evans Great Ocean Road Race ($11 million), Festival of Sails ($10.6 million) and Archibald Prize exhibition at the Geelong Gallery ($8.03 million).

The total was also boosted by the success of the inaugural White Night Geelong, which produced an economic benefit of $5.1 million, and will return to the city in 2021.

Greater Geelong now has an incredibly dynamic and varied calendar of events that receive support from the council via Geelong Major Events sponsorship. These are a significant driver of tourism and support local business in a big way. They also bring national and international exposure to the region through TV and media coverage.

"14 of the events provided some level of free public access, meaning they’re accessible to everyone.

"A big thanks to all committee members for their work during this 12-month period.”