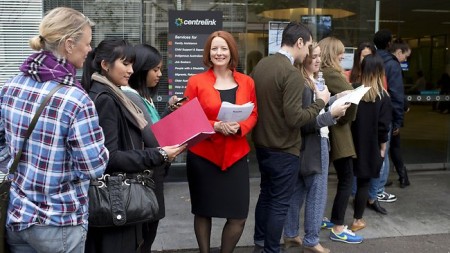 The Madame Tussauds Sydney attraction has been widely condemned for using Julia Gillard's fall from the Australian Prime Ministership as the basis for a publicity stunt.

The day after Kevin Rudd was sworn in as Australia's new Prime Minister, the attraction issued a press release with the headline, 'Julia gets in line at job centre', accompanied by a photograph of the former Prime Minister's Madame Tussads Sydney wax figure standing in a queue at Centrelink.

The release read "following her dramatic fall from power on Wednesday night, Julia Gillard's wax figure yesterday made her way down to a job centre in Sydney to start looking for a new job."

The entry of the Merlin Entertainments managed attraction into the political arena has been widely criticised.

Writing in the Sydney Morning Herald, Hardie asked "when does a publicity stunt in the name of entertainment cross over into a tacky, potentially offensive, classless act of ticket sales over tact?"

He added "this is an unfunny joke at a respected leader's expense. If her political opponents did it they would be rightly chastised. When an 'entertainment venue' does it, it's a disgrace."

Hardie opined this is not "political satire nor pointed protest. Let's be clear. This is an effort to make money out of another's misfortune."

"I think your PR stunt was in amazingly poor taste ... like her or loath her she was the leader of our country for several years and the office should be respected."

"In this instance it is not a case of any publicity is good publicity. Sad, low brow and in bad taste. Your marketing and publicity teams should be embarrassed by a cheap and disrespectful stunt."

"Offensive and moronic. Talk about misreading the mood. I sincerely hope that a few non-wax heads from your head office might be joining the same queue."

"A wax figurine of Julia Gillard at Centrelink isn't a publicity stunt, it's just plain stupid - and offensive."

"You possibly have the most tasteless PR team in Australia right now. Your publicity stunt putting a wax figure of Julia Gillard outside a centrelink office is a disgrace to your company ..."

"I(')m completely disgusted at your organisation. Have fun at the bottom of the barrel ..."

"Your Centrelink stunt is a disgrace - take it down and apologise."

20th May 2012 - MADAME TUSSAUDS SYDNEY A MODEL OF ATTRACTIONS INVESTMENT