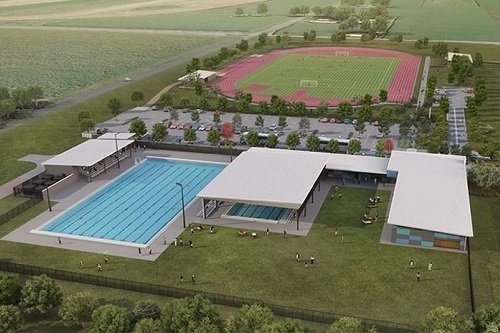 Set to open in the first quarter of 2019, work on the Mackay Regional Sports Precinct project is reportedly running ahead of schedule with key construction milestones at the 12-hectare site at the CQUniversity Ooralea campus having been achieved in recent months.

Mackay Regional Council has also announced that the facility will be known as the Mackay Aquatic and Recreation Complex, or Mackay ARC.

Mackay Deputy Mayor and Chair of the Precinct Advisory Committee, Amanda Camm, said the catchy name would be a great promotional tool, advising “we wanted a name that can be part of the complex as it continues to evolve.

“This is a world-class precinct that deserves a unique name and modern, fresh brand.”

Councillor Camm said the next phase would be to seek community opinion on individually naming the aquatic and athletics facilities, adding “in the New Year, we’ll ask the community to suggest potential names for each of the facilities.

“As this is a community-owned asset, it is pertinent that we see what options local residents come up with.”

Construction of the Mackay ARC is progressing well, with the synthetic Rekortan athletics track being laid this month and most of the tiling work completed for the three aquatic facilities.

Mackay Mayor Greg Williamson says the $23.9 million complex catered for the future growth of the region, stating “this complex will put us on the sporting map and bring many state and national competitions to the region,” he said.

“But more importantly, it meets the needs of sport and recreation in a liveable city.”

Belgravia Leisure, which will manage the facility, is currently seeking a manager for the facility. Click here for information.