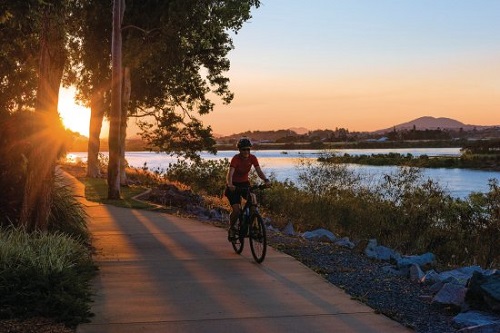 Mackay Regional Council has commenced construction of a shared bike and pedestrian pathway that will link Mackay Harbour to the Mackay City Centre.

The pathway will include four crossings and, weather permitting, is expected to be finished by early May 2020.

The 2.6 kilometres of shared path and boardwalk will provide a continuous link from the Mackay Harbour into the City Centre and will connect to the existing Bluewater Trail.

The Council is also looking forward to installing some new play equipment at Northview Park in Glenella next month.

The blue and white climbing towers in the playground are being replaced with an impressive new play unit featuring two three-story, interconnected climbing towers measuring 7.6 metres in height.

The small combination unit, old carousel and two single-seat spring rockers will also be replaced as part of the playground’s upgrade. A new roofed shelter will replace the existing structure shading the small children’s play area as well.

Advising that the new towers would be the first of their kind to be installed in Queensland by the manufacturer, Mackay Councillor Ayril Paton stated "the existing play equipment at Northview Park was installed in 2006 and is now 14 years old, so we are looking forward to bringing something new and exciting to Northview Park.

“The park is an extremely popular location for children’s birthday parties and the upgrades will continue to offer something for a variety of ages to keep all the kids entertained.

“The older kids will have hours of fun navigating their way up the huge three-storey structure and zipping down the two large spiral slides on either side or the smaller third slide.

“There will also be plenty to entertain the younger kids once the other items of new play equipment are installed.”

While improvement works are underway, the playground will be temporarily closed from mid-February until the end of April.

The Council is also seeking expressions of interest for a new community reference group to help inform the redevelopment of facilities at Mackay’s Memorial Swimming Centre.