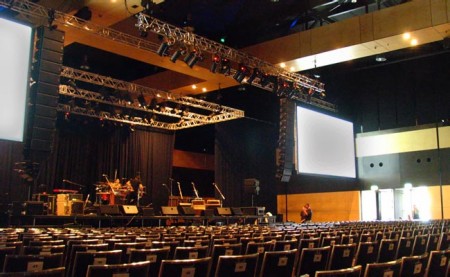 Announced at the recent Australian Institute of Architects' 2010 North Queensland Regional Architecture Awards, the MECC by Cox Rayner Architects won Building of the Year while popular swimming spot Bluewater Lagoon, by AECOM, won a commendation for its form work.

Mayor Col Meng is delighted with the award accolades, success he credits to those who work hard to achieve best practice, explaining "the MECC also received a Regional Commendation which automatically means the MECC is considered at the state finals for the Queensland best building award, and I think this reaffirms its claim to be a serious player in premier convention, banqueting and performing arts facilities."

From the MECC's opening date of 11th July last year, Mayor Meng said staff had been inundated with praise about the building's versatility.

Mayor Meng said the MECC, and Bluewater Lagoon alike is the culmination of years of planning, and credit should be given to the previous council for its foresight and commitment, commenting "the Bluewater Lagoon must also be appreciated for the care taken with infrastructure concepts which began many years back, such as nutting out the amenities blocks, administration building, kiosk and shade structures." 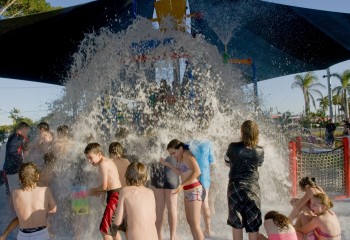 Mayor Meng said "architects are chosen based on merit, after a tough tendering process, so to have an award-winning outcome is a true testament to their standard of work.

"These projects are stellar examples of how council, working collaboratively with businesses and the community, can deliver truly integrated outcomes for major public projects."

17 architectural projects were entered into this year's awards, from which all commendation recipients are now in the running for Queensland Architecture Awards (to be announced in Brisbane on 19th June).

Mayor Meng said Mackay is home to many wonderful facilities and it's important we continue to promote these so we can remain a vibrant and prosperous region.

In July 2009, the Mackay Water Recycling Project was recognised for its innovation, clinching the major award at the Infrastructure of Public Works Engineering Australia - Queensland (IPWEAQ) Excellence Awards.

Images: The Mackay Entertainment & Convention Centre (top) and children make the most of the Bluewater Lagoon (below).