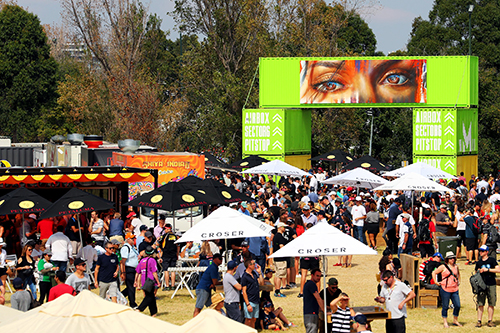 The Australian Grand Prix Corporation (AGPC) has announced the return of M-Lane in 2019, combining a festival atmosphere with the spirit of Melbourne – food trucks, live music and street art, creating the ultimate off-track entertainment experience at this year’s Formula 1® Rolex Australian Grand Prix.

From 14th to 17th  March, Melbourne’s food and art scene will make its way to Albert Park where fans can “chill-out” lakeside at the ‘Water’s Edge’, an all-new upbeat pop-up bar located in M-Lane, featuring live DJ sets throughout the four-day event.

AGPC General Manager of Motorsport, Entertainment and Industry, Craig Fletcher advised “M-Lane is a one-stop-shop for fans, and we’re thrilled to add to the experience this year with the all-new Water’s Edge pop up bar, which will be the ultimate place to chill-out with friends and family while soaking up all the action.

“Food, music, art and sport are a big part of Melbourne’s identity and M-Lane provides the perfect platform to showcase these passion points and recreate all that is great about our city>

Packed with instagramable moments, fans will also find Melbourne’s best selfie spot in the heart of M-Lane with the Melbourne city skyline and the famed Albert Park lake as a backdrop.

Fans are encouraged to relax in deck chairs while watching all the motorsport action live on the super screen and enjoying a smorgasbord of delicious food from some of Melbourne’s popular food trucks including Biggie Smalls, Sliders on Tyres, Agape Organic and more.

Fans will experience endless off-track entertainment in M-Lane. In between track action, fans can visit the pop-up Barbershop for a trim, or visit the new Jade K Beauty Bar for complimentary make-up touch ups, plus sit back and listen to the stellar line-up of international and home-grown Australian music talent at the Heineken® Village.

The Strange Fruit Circus Show will dazzle fans with electrifying display of daily aerial performances with their signature sway-pole apparatus, while the Wheel of Steel Stunt Show extreme artists will defy gravity and launch themselves into the sky to perform aerial stunts, gymnastics and flips.

Fans are encouraged to look out for the AusGP crew, who will be roving the Albert Park Grand Prix Circuit across the four-days with plenty of giveaways and exclusive Formula 1® Australian Grand Prix experiences, while cranking Fox FM playlists from their boom box.

For more information on M-Lane and the Formula 1® Rolex Australian Grand Prix 2019, go to www.grandprix.com.au