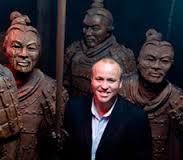 The APBF Brand Personality Award is given to outstanding individuals or teams who have contributed significantly to the lives of the people around the world and the industries that they specialise in. Previous recipients of the award include Professor Robert Fry Engle, the nobel laureate for economics; Professor Edward de Bono, the creator of lateral thinking; singer Sir Cliff Richard and former Manchester United Captain and England player, Bryan Robson.

Harris, who received his award in Kuala Lumpur on the same day that he is delivering a keynote address at the IAAPA Asian Attractions Expo, explained “this is a fantastic honour for me personally. I love Asia, and as a Company, we have toured and worked throughout the Asia-Pacific region in mainland China, Australia, Hong Kong, Thailand and of course in Malaysia.

“We have been directly responsible for creating jobs for young locals through our attractions, and we are thrilled to be most prolific creator of live interactive Hollywood branded attractions in the World.”

APBF is a non-profit organisation dedicated to the promotion and improvement of branding standards in Malaysia and the Asia Pacific.

The APBF is administered by a Board of Governors, consisting of prominent corporate leaders in Malaysia. The Patron of the APBF is H.E Tun Dr Mahathir Mohamed, the fourth prime minister of Malaysia while the Chairman is YBhg Tan Sri Elyas Omar.

Lynton V Harris was profiled in the September/October 2008 issue of Australasian Leisure Management.