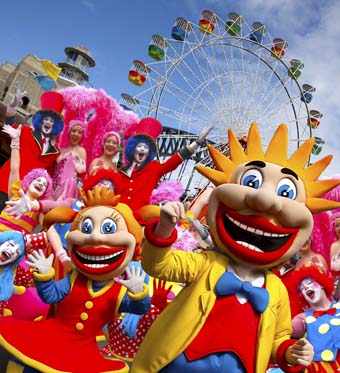 With huge international competition from other finalists in the category including Calaway Park Calgary, Alberta, Canada (Best digital marketing campaign) and The London Dungeon, London, UK (Best hard good souvenir) this is a great achievement for Luna Park Sydney, gaining international recognition for excellence in marketing and retail excellence.

The annual awards were presented by the International Association of Amusement Parks and Attractions (IAAPA) at their 2011 Convention.

2010 winners in the 'Most Innovative Program' category for their Superhero Service Program, this year, Luna Park Sydney was one of only two Australian finalists overall and the only Australian amusement park to be selected as a finalist in four categories.

• Best Hard Good Souvenir for the Award for Retail Excellence, demonstrating the Park's achievement in creativity, branding, theming and merchandising for Hard Good Souvenirs.
• The Best Digital Marketing Campaign for the Award in Marketing Excellence, praising Luna Park for its international standard achievements in marketing and advertising for the attractions industry.

Luna Park Sydney Managing Director, Peter Hearne explained "we are extremely proud to have won these awards and be recognised among the leading attractions around the world. Congratulations of the team to Luna Park Sydney who constantly set the benchmark for excellence."

Luna Park Sydney was also nominated as a finalist in two other categories:

• The Luna Ladies in the Best Atmosphere/Street Show Performance Category in the Award for Live Entertainment Excellence, recognising the performers for their stand-out creativity and exemplary production quality.
• The Best Employee Reward and Recognition Program for the Award for Human Resources Excellence, recognising Luna Park as a world leader in HR programs that empower employees to deliver the best in service, safety and fun.

Overall, the Asia-Pacific region enjoyed little success on the night winning only two other awards.

IAAPA's Brass Ring Awards are the most prestigious awards within the worldwide attractions industry that honour organisations who have developed quality programs which have made their facilities great places to work and visit. The Brass Ring Awards recognise excellence in multiple disciplines, including marketing, merchandising, human resources and entertainment as well as souvenir development and display, employee training and motivational programs, best new product and best exhibit at the IAAPA Attractions Expo 2011.

For more information go to www.lunaparksydney.com