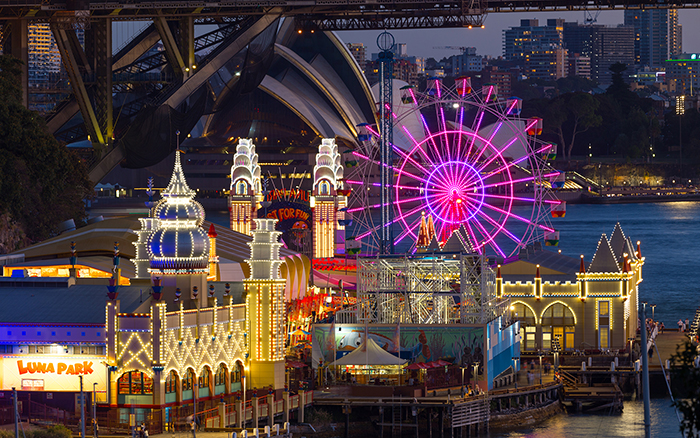 During this year’s Sydney Vivid Festival, the entire amusement park came alive with brilliant shapes, patterns and colours that lit the Midway promenade and enhanced high-octane rides such the aptly named Hair Raiser.

2018 also marked the first time Luna Park’s iconic Ferris wheel was lit for the festival following a refit, which included a massive boost in the number of lights adorning the wheel.

The tradition of the brass ring, a term now synonymous with spectacular achievement, dates back to the 1800s. Rings were suspended above carousel riders — low enough for them to grasp, but high enough to pose a challenge. Skilled riders who grabbed a brass ring often earned prizes, including a free ride on the carousel. Most rings were made of iron, but a few were made of brass, so grabbing the brass ring was a valuable treat.

The winners of the 2018 IAAPA Brass Ring Awards are:

Spirit Award
The Spirit Award is given to the most outstanding person who works behind-the-scenes to support high-quality entertainment value of the nominating attraction.
Ulrich Grawunder, Europa-Park, Germany