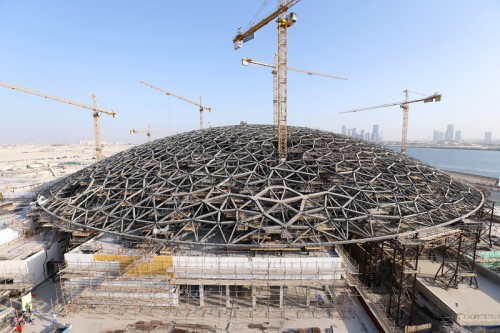 Abu Dhabi has confirmed that it is to delay the opening of its branch of the Louvre Museum until late 2016.

While construction work on the Louvre Abu Dhabi is progressing, the Emirate’s Tourism and Development Investment Company (TDIC), the Abu Dhabi Government-owned developer of the city’s Saadiyat Island cultural district, has admitted it will not meet its end of year deadline to open the vast cultural attraction.

With the museum’s structure set to be completed before the end of 2015, the building is not expected to be delivered until spring 2016, after which the installation of the collection will take place, a process that is expected to take several months.

Its 6,681 metre² Permanent Gallery will house the museum's permanent collection while the Temporary Gallery will be a dedicated space of 2,364 metre² presenting temporary exhibitions of international standards.

When completed the Louvre satellite will be one of the marquee cultural institutions located in the heart of the Saadiyat cultural district. The others attractions are Sir Norman Foster’s Zayed National Museum and Frank Gehry’s Guggenheim Abu Dhabi.

The rescheduled opening to the Louvre Abu Dhabi may also impact the opening of the other institutions, with the delay being the third since Abu Dhabi burst on to the global cultural scene in 2007 when it unveiled a bilateral deal with the French Government to open the world’s first overseas branch of the historic Paris museum.

The museums of the Saadiyat cultural district mark the centrepiece of Abu Dhabi’s attempt to boost its cultural standing, supplementing the acclaimed biennale in Sharjah and Dubai art fair, as well as being a tourism drawcard.