Live Performance Industry worth more than $1.51 billion to the Australian economy 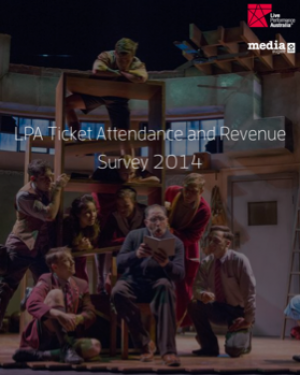 Australia's live performance industry outperformed the retail and accommodation industries in 2014, with Live Performance Australia (LPA) revealing that the industry generated $1.51 billion in revenue and 18.54 million in attendance last year.

Despite showing a drop in the average ticket price and reported lower consumer confidence, the LPA’s Ticket Attendance and Revenue Survey 2014 shows a vibrant industry with ticket sales increasing by 2% and attendance growing by 3.4% through 2014.

“And more people attend live performances annually than they do sporting events.”

The increase in ticket sales and attendance, in particularly the significant increase in the Festivals category can largely be explained by the inclusion of new data partners MONA, Oztix, Brisbane Powerhouse and Hayes Theatre Co that has been identified as improving the “scope and rigor” of the report.

The Survey showed that Contemporary Music, Musical Theatre, and Festivals accounted for 70% of all industry revenue in 2014, and that, echoing reports of previous years, the survey found Contemporary Music and Musical Theatre to be the two largest contributors to the industry, generating 40.1% and 21.2% of revenue respectively and a combined attendance rate of 51.6%.

The Circus and Physical Theatre, Ballet and Dance, and Theatre categories experienced significant declines in both overall revenue and attendance due to a number of popular international performances that occurred in 2013 not returning to Australia in 2014.

In terms of national trends, the average spend on live performance per capital was reported at $64.67.

The report found that Victoria, New South Wales, and Western Australia commanded a larger share of both revenue and attendance compared to their respective share of Australia’s population.

Although Victoria experienced a decline in revenue (-5%) and attendance (-5.2%) in 2014, it still remained well above its national share of the population and had the highest spend per capita both in 2014 and 2013.

In 2014, New South Wales experienced gains in revenue (10%) and attendance (4.6%) largely driven by growth in the Musical Theatre category, which included successful runs of The Lion King and Strictly Ballroom in Sydney.

For Tasmania, part of this growth can be explained by the first time inclusion of data from Oztix and MONA while in the Northern Territory, gains were driven by the Contemporary Music, Circus and Physical Theatre, and Children’s/Family categories.

Russell stated “we have access to a greater variety of high-quality local and international performances than ever before, which the report shows Australians truly value and enjoy.”