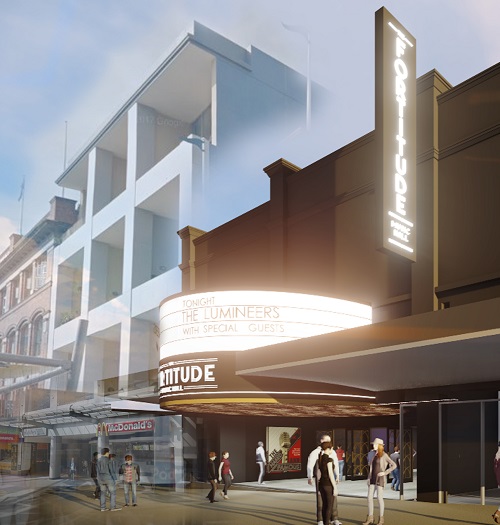 Key players in the Australian music scene including John ‘JC’ Collins (former member of Powderfinger and owner of Brisbane venue The Triffid), Paul Piticco (co-founder of Secret Sounds), along with Scott Hutchinson, Chairman of Brisbane-based Hutchinson Builders and Live Nation, the world’s leading live entertainment company, have come together to back a new Brisbane live music venue - The Fortitude Music Hall.

Located in Brunswick Street Mall in the heart of Fortitude Valley - Brisbane’s foremost music destination - the venue will showcase state-of-the-art production while paying homage to the former Brisbane venue Festival Hall, which was the city’s iconic main live music venue between 1959 and 2003.

Explaining the vision for the venue, Collins stated “it’s always been our dream and mission to build a venue that fills the void left by Festival Hall and we are proud of the vision we’ve created for The Fortitude Music Hall. The masterplan is well and truly rolling out for a venue and space that will enhance the area and one that the community will enjoy and benefit from for many years to come. We are doing this for Brisbane.”

The concept first started when Hutchinson, Chairman of Australia’s biggest private construction company, purchased a large commercial building in the heart of the Brunswick Street Mall. Initially joining forces with Piticco and Collins to realise the new venture, the project is now backed by Live Nation as a principal partner.

Welcoming this backing, Collins advised “Live Nation own and operate some of the best live music venues in Australia and all over the world.

“From the Palais Theatre in Melbourne, to the House of Blues venues across the United States and venues such as the iconic Brixton Academy in London, Live Nation’s experience is unparalleled.

“We felt incredibly inspired by the Philadelphia Fillmore, and not just due to its similar dimensions and size to the building we have here in Brunswick Street, but the way it honours the historic traditions for music halls and local musical heritage, which is our aim too.”

Piticco added “the support we’ve received from the Brisbane community and the music community nationally has been incredible. We are focused on delivering a very special space for artists, industry and fans alike.

“Over time, we hope The Fortitude Music Hall can become as iconic as Festival Hall was.”

Today at the rapidly progressing construction site, executives gave a tour and detailed plans, including architectural designs for the hugely anticipated venue.

Commenting on design, Collins stated “we drew inspiration from all the beautiful Art Deco theatres and venues that existed in Brisbane and were torn down in the 80s.”

The Fortitude Music Hall is a visionary entertainment precinct for the city of Brisbane and in time will deliver additional food and beverage venues and a function space, becoming an important centrepiece of the masterplan to maintain Fortitude Valley’s position as a must-stop destination for local and international touring artists and an entertainment hub for locals.

Roger Field, Chief Executive of Live Nation Australasia added "the Fortitude Music Hall is set to be an industry-leading venue not just in Brisbane, but in Australia. The 3,300 person capacity will fill a gap in the market and will ensure that Brisbane and the Valley continue to attract the highest calibre of performers, while giving local audiences even more live experiences to enjoy."

Collins concluded “thanks to everyone in the community for your continued interest and support for our project, it’s going to be a great addition to the local and national music scene and we can’t wait to officially open The Fortitude Music Hall next year.”

Image shows an artist's impression of the completed venue.