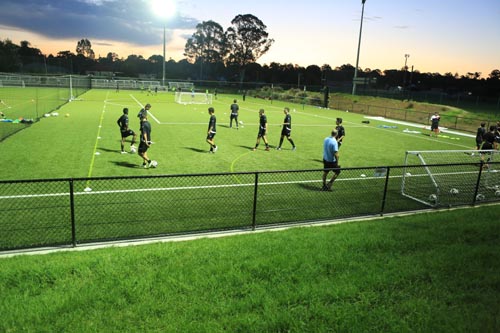 Explaining the installation, Team Sports Managing Director John Curtis "the field has been designed to meet FIFA 1 Star requirements and has also been configured with subtle line marking to accommodate eight futsal pitches within the full field.

"The design is unique in that it has curtain netting to dissect each futsal pitch which can be pulled out and retracted as required for various combinations of two x half fields, four x futsal and one x half field or eight x futsal."

With the facility able to accommodate year round use in all weather conditions, Stadium owner Vince Camera is making the venue available for Football NSW state league matches at weekends, with local team Hills Brumbies now joining Blacktown City FC in calling Lily's Football Centre home. The venue is also being used for individual training, coaching and competition futsal pitches on week days.

Camera said catering for regular midweek five-a-side leagues was part of the centre's commitment to encourage player development, stating "I've been watching my son play football since age four and in Australia I've never been impressed with the way development is done.

"I have a passion for improvement and we are committed to becoming the best football development centre in Sydney."

Multiple cameras have been installed to record games for later analysis and also live-stream the action live into the new canteen and lounge area.

Camera believes that employing technical coaches is key to the centre's philosophy and and has already employed accredited and respected coach James Lambert as General Manager of the Centre. Lambert holds an AFC 'A' coaching licence - the highest practical qualification in the Asian football confederation.

Commenting on his plans for the Centre, Lambert explained "(five-a-side) will be our core component of the centre and its success will ultimately help us give back to the local community.

"Its aim is to get boys and girls of all ages and levels playing regular football."

For details go to www.lilysfootballcentre.com.au