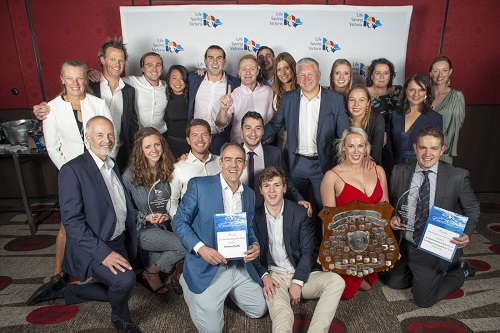 Victoria’s best and brightest in the aquatic community were recognised last night at the 15th annual Awards of Excellence at The Pullman, Albert Park.

Portsea Surf Life Saving Club took out the coveted Beaurepaire Shield to be named JLT Victorian Club of the Year, for the first time.

Welcoming the award, Portsea SLSC’s Club President Stuart Rayner sated “it’s a great morale boost and a fantastic reward for all the work that’s gone on in the last few years.

“It’s a really exciting moment for us.”

The Club also took out another major award, Outstanding Achievement of the Year, presented by the Victorian Parliamentary Secretary for Emergency Services, Harriet Shing MP.

It was awarded to the club for the growth of its Nipper competition team, which grew from zero to almost 100 in just five years.

Portsea SLSC Club Captain Matthew Perrott stated “we brought in a great group of people to grow the Nippers program.

“This award is fantastic recognition of that effort. Parents were encouraged to become involved and it’s been great to see them go on to get their Bronze certificates, or officiating certificates, and become valued members of the club. That’s been a great by-product of growing the Nippers program.”

Heath Armstrong from Lorne SLSC was presented with the Microflite John Wishart Memorial Medal Lifesaver of the Year award for his outstanding contribution to lifesaving.

Holden Volunteer of the Year (Graeme Long Memorial Medal) was presented to Patrick Spinazzola, Torquay SLSC, recognised for his drive to build the lifesaving camp programs, as well as raising the profile of training and assessment within the club.

Team of the Year went to the South Melbourne Seahorses U15 R&R team.

Almost 300 guests, including Victorian lifesavers and dignitaries, gathered for the gala event, thanks to major event sponsors Holden, Microflite Helicopter Services and JLT, as well as support from SLSA National partners Westpac, Holden and DHL.