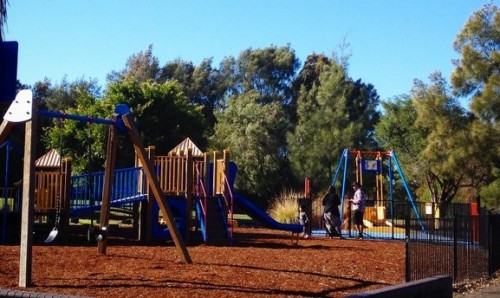 Rockdale Council in southern Sydney has unveiled a 'Liberty Swing' at its Bicentennial Park.

The Liberty Swing, developed by Wayne Devine of Jenway Industries, is a revolutionary concept in playground swing equipment for people with disabilities which allows children in wheelchairs to enjoy the fun and recreation of swinging.

The $35,000 swing, one of just a few within Sydney's St George region, is part of Council's drive to provide facilities to everybody in our community.

Opened in 1988 in honour of the Bicentenary, Bicentennial Park is currently being upgraded by the Council as part of a major redevelopment of Rockdale's Bicentennial and Scarborough Park.

The Bicentennial Park South Football Stadium is currently near completion and will be the home of newly promoted NSW Premier League team Rockdale City Suns in the 2010 season. The stadium includes changing and training rooms, a small grandstand with seating for 500 people, the installation of floodlights and upgraded of car parking spaces.

Across a footbridge, Bicentennial Park East is also subject to redevelopmenet with two large senior and one junior football fields.