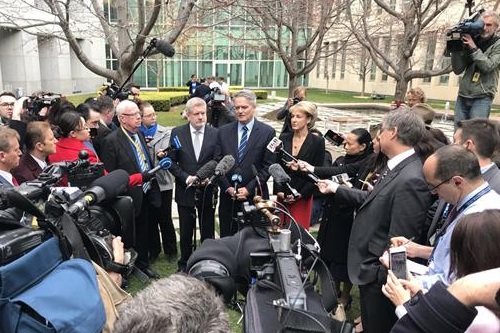 The current battle for the role of Australian Prime Minister and leadership of the Federal Liberal Party has today seen Australian Minister for the Arts and Minister for Communications, Senator Mitch Fifield resign from his position along with fellow Senior Ministers Mathias Cormann and Michaelia Cash.

Speaking on behalf of the trio, Senaor Cormann advised this morning “it is with great sadness and a heavy heart that we went to see the Prime Minister yesterday afternoon to advise him that in our judgement he no longer enjoyed the support of the majority of members in the Liberal Party party room.”

The fast moving battle within the Liberal Party for the Prime Ministership has reportedly seen a number of members of the Federal cabinet withdraw their support for Prime Minister Malcolm Turnbull over recent days.

Senator Fifield added “what has become apparent is that a majority of party room colleagues believe that there should be a transition.”