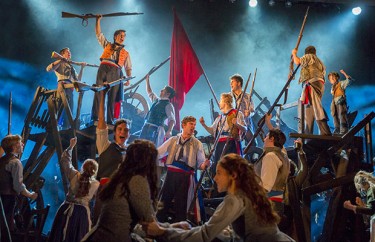 Mackintosh, currently in Sydney to oversee the final previews of his revival of Les Miserables before its opening night this Thursday (26th March) said Sydney desperately needs medium-sized venues if it is to successfully host long-running shows.

This latest production will be played at the 2,000 seat capacity Capitol Theatre.

Stating that the economics of staging theatrical productions in Australia is getting tougher, Mackintosh told the ABC "what we've lost in Sydney is the 1,500-seaters like Her Majesty's, which were torn down and not replaced.

"And I think one, if not two, 1,500-seaters is the great thing and will level the playing ground and help every producer."

Her Majesty's Theatre in Sydney was demolished 15 years ago and the similar sized Regent Theatre was torn down two years earlier.

That limits the options for musicals in Sydney, with the larger Capitol and Lyric theatres each holding 2,000 people and the smaller Theatre Royal housing just over 1,000.

Mackintosh added "sometimes you'll have a lucky run of shows that just need big theatres, but more often than not, as in London or Broadway, most of the big hits are in 1,400 or 1,500 seaters or less.

"Very few big hits are in the big theatres."

Commenting on Australian production costs, Mackintosh said the economics of doing business in Australia was getting tougher.

He concluded "the biggest problem with doing things in Australia is that it's very, very expensive ... this is one of the most expensive countries in the world, and to do something of this scale and standard which is identical to what I would do in London or Broadway, I have to think hard.

"In fact, we can't do a show here now unless we bring a physical production from another part of the world and then put the best of Australian talent with it.

Mackintosh said even financial backing from the NSW Government's Destination NSW agency was not a long-term fix for a global city that lacked enough venues, or venues varying in size.