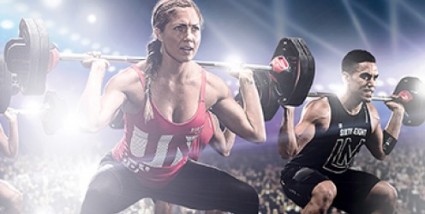 More than a thousand participants became part of the excitement at the Les Mills One Live event in Melbourne on the weekend of Saturday 11th and Sunday 12th April.

Held in conjunction with the FILEX fitness convention and Australian Fitness & Health Expo, the event featured participants working out in unison to the latest releases of Les Mills’ group workouts including Bodypump, Bodycombat and RPM.

The event also showcased pre-release programs, not yet available in clubs, presented by program directors, program coaches, trainers and presenters.

Dubbed the ‘Ultimate Workshop’ of 2015, One Live Melbourne also included a search for the Asia-Pacific’s top ‘rock star’ instructor.

Aaron Joyner, a Melbourne-based group fitness instructor (and theatrical artistic director) was the winner of The One and will travel to Sweden in October to represent the region in the global One Live final.

at the grand final this October.

Based on the premise that all Les Mills instructors are ‘rock stars’, The One aims to recognize the energy and enthusiasm of Les Mills’ professionals.

The global winner of ‘The One’ 2015, will feature in Les Mills Masterclass filming in 2016 alongside Les Mills program directors and global master trainer teams.