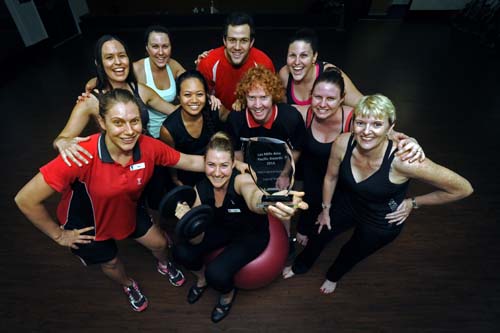 The YMCA of Central Australia was named Les Mills Asia Pacific Fitness Club of the Year, at the Fitness Awards announced at last weekend’s FILEX and Australian Fitness & Health Expo events in Melbourne.

LMAP recognised the YMCA of Central Australia in Alice Springs for “continually going ‘above and beyond’ to ensure their members and instructors are looked after.

“Member recognition initiatives include them periodically awarding loyal members a life membership as recognition of a successful long-term relationship between the member and the club, and as acknowledgment of outstanding achievement in their own personal fitness and wellbeing.

“As a club they strongly support their Instructors teaching in teams so that in every class -where possible - there are multiple instructors able to correct technique and get down to do some great floor coaching where appropriate. This also gives the members the opportunity to interact with a greater pool of Instructors and further develop their skills.”

YMCA of Central Australia Chief Executive Jess Karlsson, who was also a finalist in the fitness instructor category, was ecstatic about receiving the award, stating “I love Les Mills because it’s international. It’s the thought that we’ve got millions of people throughout the entire world working towards one goal.”

The YMCA is the only centre in Central Australia that offers Les Mills programs CX works and Grit. When these programs were first launched, the YMCA had lines out the door and needed to run back to back classes to accommodate the demand.

The YMCA is now running over 20 Les Mills classes per week and is having an enormous impact on the community with sporting clubs and corporate organisations, along with general members of the community taking memberships and utilising the Les Mills programs on offer.

The YMCA of Central Australia is one of over 100 health and fitness centres operated by the YMCA, a not for profit community charity committed to creating healthy, happy communities.

Commenting on the Award, YMCA Australia Chief Executive Ron Mell added “we’re proud that one of our great community run centres has achieved this honour, and would like to congratulate the YMCA of Central Australia team, their Board, and all their dedicated staff and volunteers for achieving this honor, which is recognition of the vital role that local YMCAs play in helping communities be healthier, happier and more connected.”

Instructor of the Year Kerrie Mewett opened up her own studio last year, teaching 13 classes a week while also teaching at her local Fitness First. Known for making exercise fun and enjoyable, Mewett is renowned for making members want to workout and giving nothing short of 100% in her classes.

With both the original and latest Les Mills programs on the timetable, Group Fitness Manager of the Year Kacie Newland offers the full variety of Les Mills programming in order to cater to the smallest participants in BORN TO MOVE™, to the mature age participants in circuit training. Consistently looking for the newest innovations to upgrade her studios from equipment, to sound, stage and lighting, and flooring, Newland is always wanting to bring the best to her facility.

Each finalist picked up a Les Mills SMARTSTEP™ and SMATBAR™ as well as training and education opportunities from Les Mills at an awards event that was opened with the Les Mills haka lead by Nathan Jones, BODYATTACK® Head Program Coach that involved Les Mills Trainers and Presenters from across Australia, Asia and New Zealand who are responsible for getting Instructors trained up and teaching in clubs.