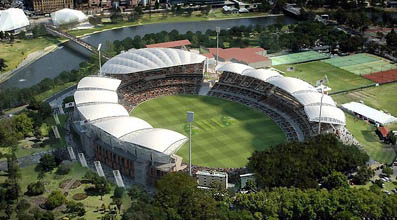 Lend Lease has been confirmed as the builder of the $535 million Adelaide Oval redevelopment.

The group has been selected by the Adelaide Oval Stadium Management Authority and the South Australian Department of Transport, Energy and Infrastructure, with work due to commence in 2012.

Baulderstone, part of Lend Lease's Australian infrastructure division, will design and build the new 50,000-seat stadium, which will transform the cricket and Australian Rules venue.

Funding is being provided by the South Australian Government, with practical completion of the scheme to be reached in 2014 ahead of the AFL season.

South Australia Premier Jay Weatherill added "we are very pleased we can start building a Stadium that will finally bring AFL back home to Adelaide Oval.

"This will bring tens of thousands of people to the centre of the city on a regular basis, which allows us to imagine a very different sort of future for that part of the city."

Premier Weatherill confirmed that the South Australian Government had secured a construction price of $350.2 million for the stadium build plus a Government-controlled project contingency in excess of 7%. A separate provision has also been made for sufficient fit-out funding to deliver the Stadium within budget.

South Australian Transport and Infrastructure Minister Patrick Conlon said the contractual arrangements included an additional provision for a $5 million payment upon completion in time for the 2013/14 Ashes Test and Round One of the 2014 AFL season.

Under the Contract, Baulderstone's tender price is fixed for design and construction and will accept a range of building risks such as weather related costs and delays and latent conditions.

Major construction will not begin until after the current cricket season.

Earlier this year, it was announced that Mott MacDonald had been appointed to the scheme, with the company's involvement including concept design and project management.

For more information go to www.adelaideovalredevelopment.com.au