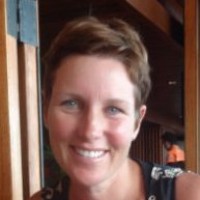 Blacktown Leisure Centre, Stanhope executive Nichole Edsall not only serves as the facility's Operations Manager but has another life as an international athlete.

Now in her sixth year at the centre (in the role of Chief Operations Manager for Blacktown Venue Management), at 5.15 am each morning Edsall is pounding the pavement, hitting the pool or saddling up on her bike as part of her training regime as a triathlete.

Last year, her sacrifice and dedication paid off as Edsall, along with husband Matt, pulled on the Green and Gold as Australian representatives in the World Half Ironman and Triathlon Championships in Florida, USA.

Competing against super athletes from across the world over a challenging combination of a 1.9 kilometre swim, 90 kilometre bike ride and 21.1 kilometre run, both Nichole and Matt finished in the top 75 in the world.

Immediately after this achievement, Nichole went straight back to training with her sights set firmly on completing a full marathon. Last weekend, Nichole lined up in the Gold Coast Airport Marathon and 42.2 kilometres later she completed the course in under four hours.

Now Edsall is training for 'Ironman Western Australia' in Busselton in December. The challenge is considerable - a 12 to 15 hour event consisting of a 3.8 kilometre swim, 180 kilometre bike and 42.2 kilometre run.

Mayor of Blacktown City, Councillor Alan Pendleton, reflects the pride felt by all of Nichole's colleagues at what she has achieved, stating "Nichole is such an inspiration as both an employee and as an athlete. It is wonderful that we have such great role models working and living in our community and Blacktown City salutes her."