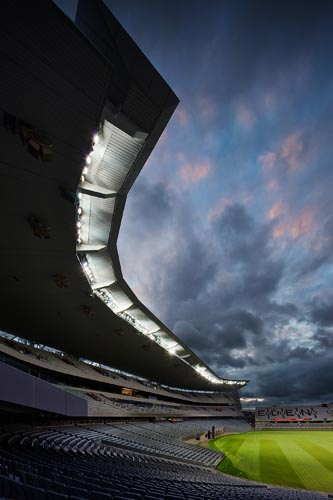 New Zealand stadiums have the opportunity to become world leaders in pitch lighting with Philips ' release of its ArenaVision range of LED floodlights.

The ArenaVision LED control system can also be used to create entertainment lighting effects that would normally require dedicated stage-lighting luminaires. At the push of a button, the user can switch between fixed lighting configurations that fulfil sports codes’ requirements, and pre-programmed special lighting effects.

Wiffen adds “lighting is critical for sports venues, not only to give the high definition needed for both players and broadcasters, but also to enhance the sense of spectacle, anticipation and emotion that comes with competitive sports, including giving stadiums that extra ‘wow-factor’ through colourful light displays.”

Philips has already lit up a number of New Zealand sporting venues such as Eden Park, Nelson’s Trafalgar Park and Dunedin’s indoor Forsyth Barr Stadium with its high intensity discharge ArenaVision range. Philips ArenaVision has also lit up major stadiums around the world, such as Old Trafford Stadium, the Guangzhou Olympic Stadium and five of the football stadiums recently used in Brazil.

Wiffen concludes “with Philips’ ArenaVision LED now successfully implemented in sports stadiums such as Ekinox at Bourg-en-Bresse, France and Chelsea Football Club’s Stamford Bridge, there is an opportunity for New Zealand stadiums to take advantage of the latest developments in lighting technology, which would benefit broadcasters, players, bill payers and spectators alike.”

Royal Philips is a Dutch-based technology company headquartered with primary divisions focused in the areas of healthcare, consumer lifestyle and lighting.