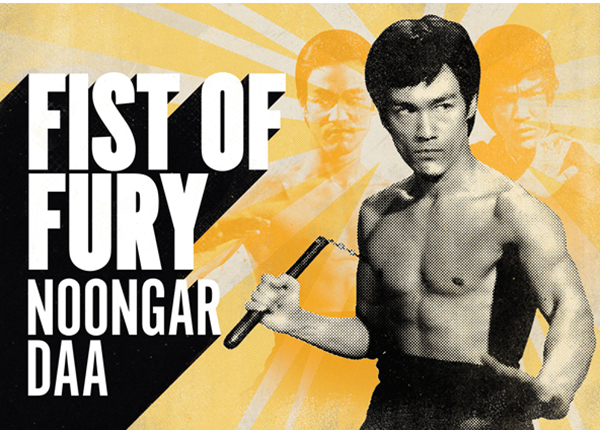 Perth Festival organisers have announced that they are taking the 1972 kung fu classic Bruce Lee film Fist of Fury and redubbing it in Noongar to make for a unique cinematic experience that will be essential viewing at Perth Festival 2021.

Fist of Fury Noongar Daa, complete with English subtitles, will screen at Lotterywest Films at the UWA Somerville outdoor cinema in February.

Noongar voice actors will dub (daa) the original Cantonese-Mandarin dialogue in director Lo Wei’s Hong Kong martial arts film that made Lee an international action hero. It will be the first film ever dubbed into Noongar.

Noongar and other First Nations culture is at the heart of Perth Festival, which celebrates an entirely Western Australian program in 2021. With the WA Museum Boola Bardip opening soon, Festival 2021 will also feature many events throughout the Perth Cultural Centre.

Bracknell and Perth Festival film programmer Tom Vincent came up with the idea for Fist of Fury Noongar Daa after being inspired by Navajo Star Wars, a 2013 Navajo-dubbed release of Star Wars Episode IV: A New Hope. That project was praised as a fun way to preserve a fading Native American language.

Bracknell advises “we thought, what if we tried something similar with Noongar. This is an opportunity to further contribute to the survival and strength of Noongar as a living language.”

Bruce Lee, who was just 32 when he died the year after starring in Fist of Fury, is celebrated as a great martial artist, philosopher and emblem of non-white power fighting against oppression. He helped change the way Asians were represented in American films and became a hero to Asian-Americans, African Americans and – in Australia – the Noongar and wider Indigenous community.

In the 1970s, only a few years after Aboriginal people were counted as citizens of their own country in Australia, Bruce Lee was a pioneering challenge to the mainstream. His strong on-screen and off-screen character stood up against injustice and racism.

Bracknell adds “Bruce Lee perfected kung fu and mastered life. He was a moorditj (solid) philosopher who led by example. Why not link the most prominent non-white film star – much more than an actor – of the 1970s with Noongar language? He’s a legend, a credit to the human race, and our people respect his journey, his art and his legacy.”

Noongar artist Barry McGuire describes Lee as “like a superhero for us Noongar mob that grew up in that era. We all thought that we were Bruce Lee when we’d get into fights. Because of him, we grew up tough.”'

A callout will be made soon for Noongar performers and other creatives to be involved in making Fist of Fury Noongar Daa.

For more information and ticketing go to perthfestival.com.au