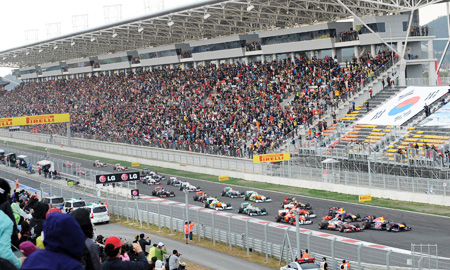 As it hosts the F1 Grand Prix at the Korea International Circuit at Yeongam this weekend, regional governments in Korea are questiong the cost of hosting and building infrastructure for major sporting events.

In the last decade, South Korea has hosted a series of mega sporting events, including the 2002 FIFA World Cup, 2011 IAAF World Athletics Championships and the F1 Korean Grand Prix. Proponents of hosting these events highlight how international competitions boost the economy and attract the world's attention.

However, a growing number of Koreans are questioning whether short-term exposure provides sufficient recompense for the large sums of money pumped into hosting the mega events.

After questions over the readiness of the circuit, Korean F1 promoter Korea Auto Valley Operation (KAVO) managed to host the race after frantic last-minute work to complete the venue.

However, it came under fire after the race for its lax preparation and poor marketing while, earlier this year the Board of Audit and Inspection launched an inquiry into the financial soundness of the F1 organiser and discovered that its debt has grown to more than 500 billion won (US$430 million).

The F1 organiser paid a US$36 million commission fee to the Formula One Management, the sport's commercial rights holder, for the Korean GP in 2010. To continue hosting the event, they must pay 110% of the previous year's payment each year.

An official from the Government of South Jeolla Province admitted that the F1 race could only generate a maximum total revenue of about US$23 million. This means that the hosts have no chance of making a profit from the Grand Prix, KAVO not having revealed the full details when they signed the contract.

The money would be used to pay off the debts of the local government, which provided hundreds of billions won to construct the 5.61-kilometre race track.

South Jeolla Province assembly member Jang Il explains the dilemma, stating "we're in a dilemma. If we issue the loan, it will burden the taxpayers. But if we refuse it, the local organisers will go bankrupt, which will seriously damage our international reputation."

Equally worrying is the South Jeolla Province having signed on to host the money-losing race for seven years with an option to extend for five more years.

When they first brought the event, the organisers had a rosy picture that they could make big money - more than 110 billion won. But in reality, the F1 Grand Prix will make a loss of 485 billion won by 2016, according to the Board of Audit and Inspection.

Facing such mounting bills and growing criticism rather than tangible economic benefits, many are expressing misgivings about whether the short-term exposure that F1 brings is sufficient recompense for the large sums of money pumped into hosting the event. Observers believe that South Jeolla's case should be a lesson for other local governments in Kora preparing to host sporting events.

Korea's next big event is the 2014 Asian Games in Incheon, which it will host Asia's biggest sporting event from 19th September to 4th October 2014.

For the 16-day extravaganza, Incheon has pledged to build 16 new competition venues, including a 60,000-seat main stadium by July 2014, with more than 1.5 trillion won of public funds.

Gwangju will also build a new swimming pool and multi-purpose gymnasium as well as an athletes' village for up to 14,400 people ahead of the 2015 Summer Universiad Games.

Many local taxpayers, however, are now beginning to wonder whether all the sports venues are worth the expense. People have witnessed the downside to such major construction projects since 2002 when Korea co-hosted the World Cup with Japan.

At that time, in order to bring the event to Korea, the country had to build 10 football stadiums. All the stadiums, except the Seoul World Cup Stadium, have been operating at a loss for years. Professor Chung Hee-joon of the sports and leisure studies department, Dong-A University, said that the local organisers should learn not to build stadiums that will not be used, stating "PyeongChang should look again at their games' plan. They promised to build four new ice venues in Gangneung, including a new ice hockey stadium. Gangneung is a small city with a population of just over 200,000. I think these stadiums will never be used again after the games end."

An early economic impact assessment by Korea Institute for Industrial Economics and Trade projected that the 2018 games would create 230,000 jobs and that the total production inducement effect would total more than 20 trillion won.

However, Chung disagrees, saying that the organisers tend to count only the possible profits, but not the inevitable costs, stating "before hosting any event, we should ask whether the benefits to be gained will outweigh the cost of the events."

In the coming days, the South Jeolla Province assembly will convene a meeting to decide whether they should allow aid loans to the F1 organisers.