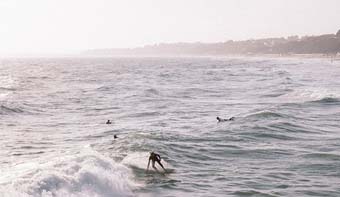 Europe's first artificial surf reef has been launched on the south coast of England.

It is one of four artificial reefs worldwide including Narrowneck in Queensland; Cables in Western Australia and Mt Maunganui, New Zealand.

The reef, designed by Dr Kerry Black, Managing Director of Raglan, New Zealand-based ASR Ltd, has been created by geo-textile sandbags being fixed to the seabed, nearly 225 metres from the shore east of Boscombe pier in Dorset.

The large geo-textile bags, pumped hard with sand and covering roughly the size of a football pitch, mimic the effects of a natural reef and act like a ramp, pushing waves upwards and shaping them into powerful barrels.

Rather than creating waves the reef doubles the height and number of good surfing days.

The reef, part of the Boscombe Spa Regeneration Project aims to put the Bournemouth suburb on the UK surfing map, is designed to provide a grade five wave on a day.

The beach will be patrolled by Royal National Lifeboat Institution lifeguards, from 10am till dusk, 365 days a year.