Kings Park expert advises that risk is good for children 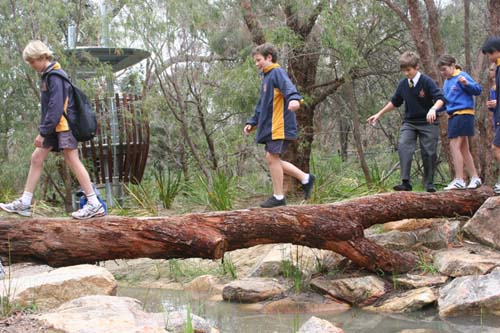 Children who take risks are more likely to grow into resilient adults, according to a Canadian Professor of Social Work who visited Perth's Kings Park this week.

Dr Michael Ungar, who visited Perth as ‘Thinker in Residence’ for Western Australia’s Commissioner for Children and Young People, gave a provocative presentation to educators from Kings Park and other Perth agencies about ‘the risk-taker’s advantage”.

Dr Ungar said spaces like Rio Tinto Naturescape Kings Park were increasingly important in a society where troubling behaviours associated with ADHD, anxiety, poor self esteem and a lack of responsibility are increasingly common among children.

He said the dual effect of providing time and space for unstructured play and exploration, combined with the “healing power” of nature made Naturescape a significant community asset.

In his presentation, Dr Ungar questioned whether today’s children are too safe for their own good, stating “by preventing children from taking any risks or facing challenges, we are not preparing them well for later life.”

Dr Ungar challenged educators and parents to let children take age-appropriate risks, adding “by saying yes, you are saying you trust that child to be responsible and that they are capable of rising to the challenge. This boosts a child’s sense of identity, self respect and willingness to determine their own future.

He said children should be left to their own devices to negotiate rules for play and games with others, as this gives children the building blocks to negotiate and build healthy relationships.

Dr Ungar is internationally recognised as an expert in strengthening resilience in children. He advocates the importance of a community-wide approach among families, schools, government and business.

He praised Kings Park for its determination to address the barriers to creating a facility like Rio Tinto Naturescape Kings Park. This included working with insurers to find a balance between risk and benefit to visitors, addressing issues faced by schools and parents and undertaking careful research and consultation to achieve a successful result.

Dr Ungar’s presentation was jointly hosted by Rio Tinto and Kings Park. Rio Tinto is the major funding partner of Rio Tinto Naturescape Kings Park: an outdoor learning and discovery space which offers children the opportunity to explore and challenge themselves in a natural environment. 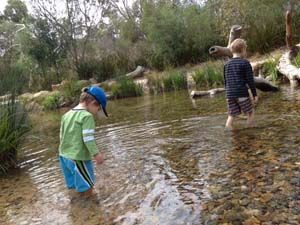 Kings Park Chief Executive Mark Webb said the facility was the ideal location for a presentation on this topic, explaining “when Rio Tinto Naturescape Kings Park first opened in 2011, the notion of valuing risk-taking in building resilience was quite a new concept. However, we have seen this idea gain momentum with educators and families.

“Kings Park’s primary motivation for developing this facility was to give children a hands-on experience of nature so they learn to appreciate and conserve our natural environment. However we recognise it offers many other benefits to children’s health and well-being.”

The facility collaborates with a range of organisations to promote healthy childhood development and inquiry-based education. This includes active involvement with Nature Play WA and their ‘Passport to an Amazing Childhood’, which includes more than 120 missions for children.

17th October 2011 - KINGS PARK FACILITY TO ENTICE CHILDREN BACK OUTSIDE