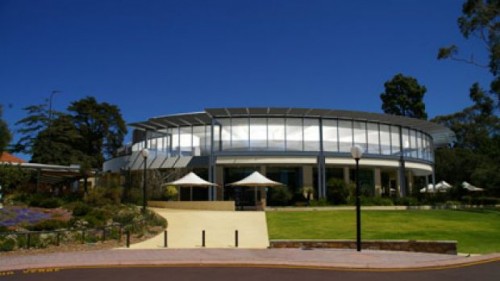 The new State Reception Centre in Perth's Kings Park, with extraordinary 180 degree views of the city, has been unveiled by Western Australian Premier Colin Barnett.

Commenting on the the rapid contstruction (the venue was built in just six months), Premier Barnett stated "the timely completion of the project, under budget, despite a tight schedule and complexities of working around an operating restaurant and function centre, is an outstanding achievement."

Premier Barnett also outlined the significance of the building, adding "this State-owned facility will be the main venue where the prime ministers and presidents of the 53 Commonwealth nations meet.

"This is the centrepiece of the Commonwealth Heads of Government Meeting (CHOGM) and ensures our city is showcased appropriately. (It) will be a lasting legacy of CHOGM 2011 and become a long-term asset for the community of Perth and the people of Western Australia."

The project included the replacement of the temporary marquee on the site with a permanent high-quality facility able to host major receptions and dinners suitable for Government, corporate and community events, including weddings.

In addition, the adjacent Botanical Cafe has been expanded to include a new outdoor seating area providing affordable alfresco dining and 'BYO' service in a relaxed setting with one of the most stunning outlooks in Perth.

Premier Barnett has also revealed a special sports medallion, produced by The Perth Mint, to be presented to players involved in the CHOGM 2011 international netball and hockey events.

He concluded "we wanted to give players something to commemorate their involvement in CHOGM sporting events and The Perth Mint has created a striking silver medallion featuring the Western Australian black swan against a backdrop of the Swan River and the Perth cityscape."
CHOGM 2011 is being held in Perth from 28th to 30th October.