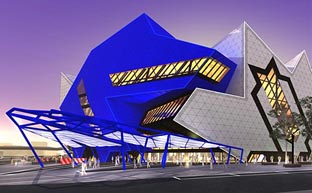 Set to open in late 2012, AEG Ogden recently signed an management agreement with the owner, VenuesWest.

Announcing the appointments, AEG Ogden Chairman and Chief Executive Harvey Lister said the company had selected key executives from its existing operations with many years of practical experience and good local knowledge of industry issues to join the team stating that "all three will provide valuable support to the Arena's General Manager, David Humphreys who was appointed to that role in January this year."

Glenn Hall, Business Manager.
As Business Manager Glenn Hall will be responsible for the financial management of the business and will oversee the functions of finance, administration, Information Technology and Human Resources.

Hall was previously General Manager ï¾ Corporate Services for the AEG Ogden managed Perth Theatre Trust, a position that he fulfilled for more than 10 years managing the four PTT venues including the new State Theatre Centre of Western Australia, and is credited with turning around the governance and business management for PTT.

Hall brings an innate understanding of both the Perth venue management industry and AEG Ogden operating requirements to the team.

Katie Musham, Sales and Marketing Manager
Katie Musham will be responsible for the procurement of sponsorship and corporate sales opportunities to drive revenues and development of concepts in event creation and co-promoted events. She will also oversee the venue's marketing programs.

Musham joined AEG Ogden in 2010 after relocating from London, where she was a senior executive at the world's number 1 live entertainment venue, the O2 Arena. She worked in Sydney in the interim as the Business Development Manager - Arenas, before being appointed to this role.

Katie will commence work on the Perth Arena project on 28th November out of the Sydney office and relocate to Perth in early January.

Bright will support the Executive team to deliver Stakeholder requirements and achieve the operating objectives of the Perth Arena and VenuesWest.

Bright will move across to the Perth Arena project on 31st October.

Lister believes all three appointments were significant to the progression of the venue's operations and planning its pre-opening, adding "the combined experience and understanding of the industry these three executives bring to the project will assist in achieving a smooth transition from its construction to operational phase and begin building momentum toward the highly anticipated opening of the venue."